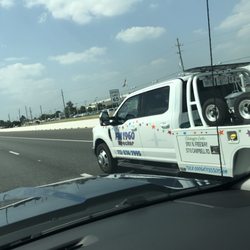 AUSTIN – The Texas Commission of Licensing and Regulation recently voted to revoke a Houston company’s towing license because of its dishonest and fraudulent conduct. Commissioners also assessed a $5,000 administrative penalty – the maximum allowed by law – reflecting an upward enhancement from the standard penalty due to the nature of the violation.

“We take honesty and integrity in the towing business seriously and will continue to vigorously prosecute instances where our licensees have not treated consumers fairly,” said TDLR Executive Director Brian E. Francis. “Dishonest behavior by just a few people affects the reputations of all of our professional, hardworking towing licensees.”

The Commission’s action came after an Administrative Law Judge at the State Office of Administrative Hearings found that Rodolfo Meraz, who does business as FM 1960 Wrecker, had violated TDLR rules requiring that towing companies conduct all operations with honesty, trustworthiness, and integrity. Meraz also violated a TDLR rule that a vehicle involved in an accident be towed from the scene directly to a licensed vehicle storage facility (VSF) or to a location designated by the vehicle owner.

Although Meraz and FM 1960 Wrecker are no longer allowed to tow any vehicles, Meraz continues to operate another towing company, Sixty Wrecker, which is currently the Respondent in a pending Department case.

The revocation against Meraz and FM 1960 Wrecker resulted from the towing company’s use of fraud and deception to obtain a vehicle owner’s signature on documents after a multi-vehicle accident. The documents purported to authorize the car being taken to Meraz’s body shop, Bammel Collision, LLC. at 9950 Bammel North Road in Houston. Meraz was the sole proprietor of the towing company as well as an officer and manager of the body shop, which had the same address as the towing company. Meraz benefited financially by using fraud and deception to obtain the vehicle owner’s signature to have the vehicle taken to his body shop. (Body shops in Texas are not currently regulated.)

Because the vehicle was taken to Meraz’s body shop, instead of the location requested by the vehicle owner, or to a licensed vehicle storage facility, it cost more than $1,400 to recover the vehicle, which was a total loss and incapable of repair.

This scenario is known as “flipping” — deceptive and illegal conduct by towing companies and vehicle storage facilities aiming to convince vehicle owners to waive their rights and have their vehicles taken to, or transferred to, body shops after automobile accidents. Texas law generally requires that vehicles must be taken to, and remain at, licensed vehicle storage facilities where fees and costs are regulated.

Meraz’s attorney, during the hearing at the State Office of Administrative Hearings, and in his presentation before the Commissioners, argued that the company could not be held responsible for the conduct of its tow truck drivers, which it characterized as “independent contractors.” Both the Administrative Law Judge hearing the case, and the Commissioners rejected this argument, and assessed penalties and revocation against the company.

Consumers who have been involved in an auto accident – especially those in Harris County and the surrounding area – are urged not to sign any documents relating to their vehicle until speaking to their insurance company. This includes documents that may be presented by a tow operator responsible for removing their vehicle from the accident scene.

Anyone who has additional information on cases within the city of Houston limits, or who may be a victim of flipping, is urged to contact the HPD Auto Dealers Detail at 832-394-4800 or 832-394-4969 (after-hours) or send an email to: hpd.autodealers@houstonpolice.org.

For incidents outside the city of Houston limits, but within Harris County, individuals can contact the Harris County District Attorney’s Office, Consumer Fraud Division, at 713-274-555 or file their complaint on-line at: https://www.harriscountyda.com/complaint-form.

Additionally, consumers may file a complaint online through the TDLR website against a tow company, tow operator, or a vehicle storage facility at: https://www.tdlr.texas.gov/Complaints/