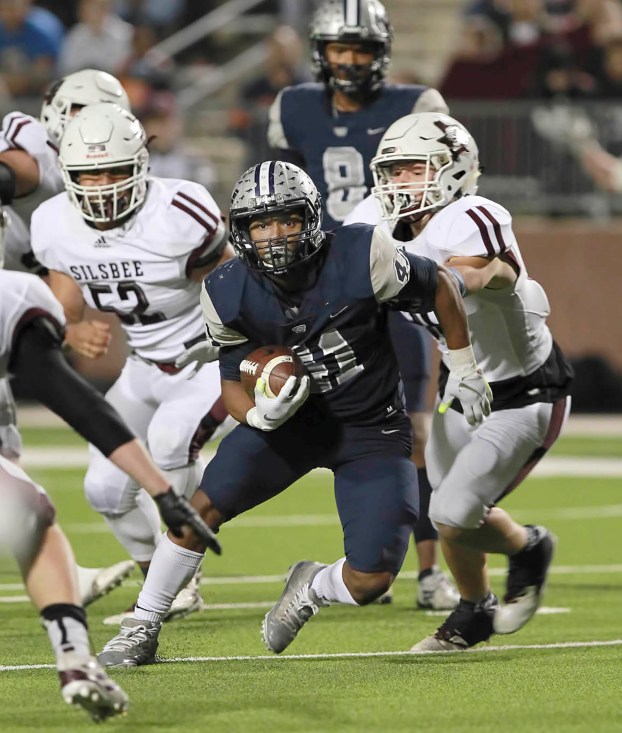 Young Mustangs had quite a run

WEST ORANGE – Another banner season came to a completion for the West Orange-Stark Mustangs last week as they fell to District 10-4A Division II rival Silsbee 35-28 for the second straight year in the Class 4A Region III Division II Finals in Beaumont.

The loss stung for the Mustangs (10-2) but the program and its fans had plenty to cheer about throughout the season.

WO-S made the Regional Finals for the ninth straight year under the guidance of long-time coach Cornel Thompson, who has a 110-19 record in guiding the Mustangs, and they also claimed a 10th straight district title.

“It was a tough way to end the season but it was another good season here,” said Thompson. “There is no doubt, expectations are always so high here and that is too be expected. You can’t win them all but we sure do love to try. That’s credit to our kids and coaching staffs we’ve had here over all of these years.”

The Mustang coaching staff dealt with a young Mustangs team this season, one that featured just nine seniors, so there was certainly growing pains along the way.

“We didn’t have a big senior group but I tell you what, those guys led the way and our younger kids really accepted their leadership,” said Thompson. “The thing about the team this year is they continued to get better throughout the course of the season and they learned a lot along the way.”

The Mustangs opened the season with wins over Nederland and LC-M before falling on the road to 3A state power Newton. They also defeated Bridge City in non-district. However, weather hampered the young Mustangs in two non-district tilts as Tropical Storm Imelda canceled the game with Crosby and lightning and rain also halted their non-district game with Jasper. To make it even sadder, both of those games were scheduled at home on the new turf.

“It was tough during that stretch because with such a young team, it was hard to get any momentum going because you were going to practice but not playing on Friday nights,” said Thompson. “Those two games would have really helped us grow up and mature more.”

Once they got into the routine again when 10-4A play started the Mustangs started to find their groove, including a big 17-9 road win at Silsbee to start loop play. They then continued to roll through their other three 10-4A counterparts to claim yet another district title.

“After we started district play, you could see the younger ones start to catch on to things and the kids just took off from there,” said Thompson. “You could just see us grow as a football team week after week and that carried on, especially through the first three rounds of the playoffs.”

The Mustangs zipped through Huntington (56-7), LaGrange (42-14) and Bellville (24-14) before seeing Silsbee score 18 unanswered points in the fourth quarter in the Regional Final.

“The Silsbee game is one of the toughest losses we’ve ever had here,” said Thompson. “We left some points on the board. There were a few decisions we would love to have back. Give Silsbee their due, they made some big plays and they made them count.”

Meanwhile, Thompson just wants to keep the Mustang engine churning as the program will look to seek its 10th straight trip to at least the Region III Finals next year.

“I know that loss was hard last week, and it left a bad taste in our mouths for sure,” said Thompson. “But there is so much for these kids to be proud of. Another district championship and helped the Mustangs to their ninth straight regional final appearance. How many schools across the state can say that. Myself, along with the staff, are very proud of what they accomplished.”

There is no question that WO-S has been the “bellcow” of football in Southeast Texas since its inception in 1977. The Mustangs have played 102 playoff games and have won 75 of them. That includes four state titles and eight state championship game appearances.

In just nine years as the head coach after serving nearly three decades as the defensive coordinator, Thompson has a 37-7 record in the playoffs alone.

The Mustangs still own the best all-time winning percentage of all-time in the state at .804 (416-100-3), despite suffering their 100th loss against Silsbee last week. Not bad when you’re only suffering your 100th defeat and it took 43 years to get it.

Now, Thompson and the Mustang staff are ready to get the Mustangs thinking about next season.

“This season was a good run and we have a lot of young talent that grew up this season,” said Thompson. “We look forward to getting the guys rolling again in the offseason program. We have some kids that are ready to go to work and we have a lot of talent back. We’re looking for big things next year, we wouldn’t have it any other way.”