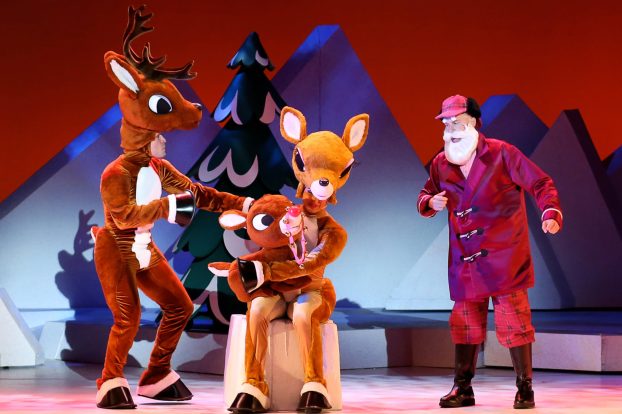 THE NORTH POLE – Following four successful years of touring and more than 350 performances, the “most famous reindeer of all” from the longest-running and highest-rated holiday television special will fly into Orange, Texas at Lutcher Theater on Saturday, December 14, 2019, at 3 p.m. and 7 p.m. live on stage with the critically acclaimed Rudolph the Red-Nosed Reindeer: The Musical.

The world’s most famous reindeer and a holly jolly cast of iconic characters including Hermey the Elf, Yukon Cornelius, and the Abominable Snow Monster will help Santa save Christmas.

In 1964, the beloved stop-motion animated television classic, Rudolph the Red-Nosed Reindeer, made its network television debut and has been delighting audiences across the country for over 50 years.

The national tour is a family favorite — a “holiday staple” (The Boston Globe) and an “utterly charming, top-notch production” (Orlando Sentinel).

Projections, costumes, and characters are faithfully brought to the stage against a backdrop of nostalgic set designs. The 12-foot-plus-tall Abominable Snow Monster is jaw-dropping. The cast brings high energy to classic songs and dialogue, while irresistible and lovable puppets highlight the charming “roughness” from the television show’s stop-motion effects.

Flom said, “The familiar story elements from the television special are addressed with a talented cast and puppeteers who help recreate the magic on stage.”

Since the special itself is a classic musical, the stage show does not feel at all like an adaptation and audiences are surprised and delighted when they see performances of songs such as “Fame and Fortune” and “Rockin’ Around the Christmas Tree” that are heard but not performed in the TV special.

The story tells the tale of a young Rudolph who, because of the appearance of his bright, shining nose, is excluded from the Reindeer Games. He flees Christmastown and meets up with new friends Hermey the Elf and Yukon Cornelius. After finding The Island of Misfit Toys, Rudolph journeys home, where a snowstorm of epic proportions is threatening Christmas. Can Rudolph rescue his family and friends and help Santa save the holiday?

The Lutcher Theater Patrons will join forces with the Salvation Army of Orange to bring Christmas to the children of Orange County area through the Angel Tree program.

“We try to personalize the help given to each child as much as possible. We are able to do this by not just collecting the child’s age but also their clothing sizes, an item of need and a wish for Christmas. Then we look for individuals around the community who would be willing to adopt those children and shop for them.” Capt. Jan Zuniga of the Salvation Army of Orange said. “Many times children get a toy or two and don’t get to enjoy in the feeling of a new pair of Christmas Pajamas or a new warm blanket! We are excited about partnering with the Lutcher Theater to be able to provide as many of those kids with a new set of Christmas Pajamas and a warm blanket this year!”

Collection boxes will be set up in the first-floor lobby of Lutcher Theater during the 3 p.m. and 7 p.m. performances of Rudolph The Red-Nosed Reindeer: The Musical.

Rudolph’s partnership with PACER’s National Bullying Prevention Center continues this year. The show offers a free toolkit to teachers that leverages the powerful messages from the Rudolph story to teach important character values. In addition, a portion of proceeds from venue sales of the book, T.E.A.M. Rudolph and the Reindeer Games, will be donated to PACER.