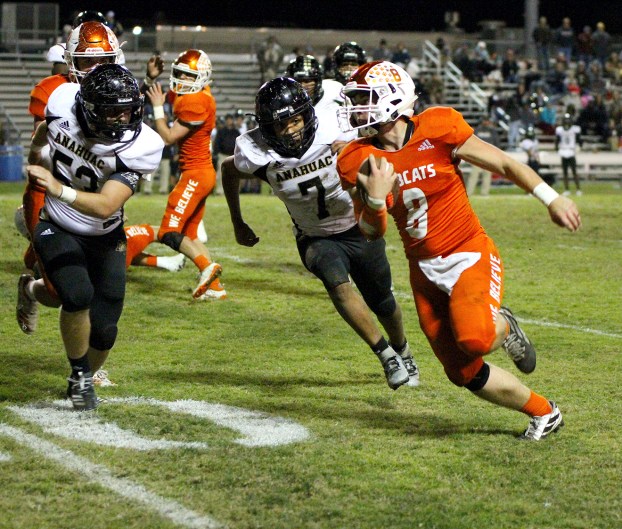 Tommy Mann, Jr./Orange Leader Orangefield quarterback Gunner Jones turns the corner against Anahuac this season. Orangefield will be moving back up to Class 4A after the UIL cutoff numbers were announced Tuesday.

UIL announces cutoff numbers: Bobcats moving up to 4A, Vidor going down to 4A

The University Interscholastic League announced their cutoffs for each classification for the upcoming district realignments that will come the first Monday in February.

All of the schools across Texas turned in their enrollment numbers in October and the UIL broke them down and adjusted their numbers.

Of course, most everyone knows that the football season is broken down into division 1s and 2s with the exception of Class 6A.

One thing for certain, this year’s numbers certainly changed things up for Orange County schools.

There will be plenty of other moves as well across Southeast Texas.

Now everyone will wait to see what happens when the UIL sets up the new districts in February.

In football, the 4A Division II district could have WO-S, Bridge City and Orangefield in it as well as Silsbee, Hamshire-Fannett and Hardin-Jefferson.

In all of the other sports, there could be a district featuring mainly Orange County schools with Bridge City, Little Cypress-Mauriceville, Orangefield, West Orange-Stark and Vidor all competing against one another.

It should be interesting indeed.

CONFERENCE 1A DIVISION II: 59.4 and below

The WOS (Home) vs. Silsbee (Visitor) Quarterfinal Football game will be played on Friday, December 6th at 7:30pm at BISD Memorial... read more