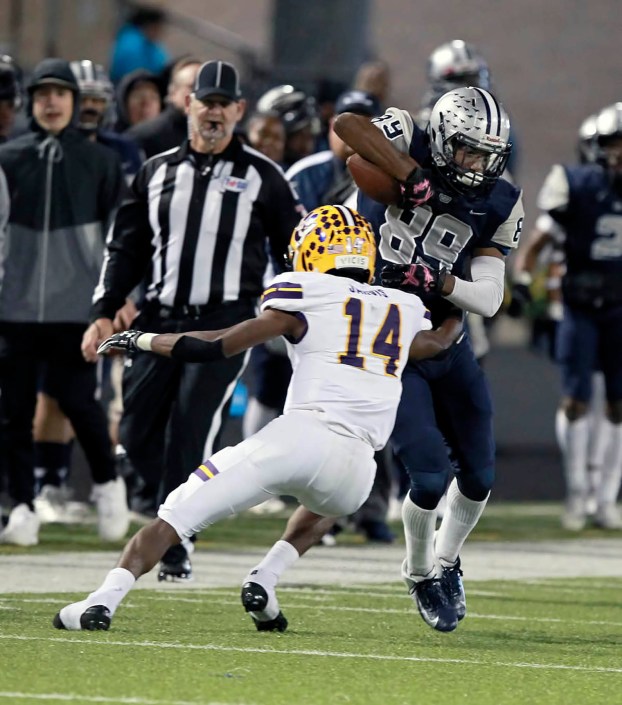 WEST ORANGE – After taking care of business 42-14 of LaGrange in the area round of the Class 4A Region III Division II playoffs last Friday, the West Orange-Stark Mustangs will turn their focus on the Bellville Brahmas Friday in the Region III Semifinals when the two teams battle at 6:30 p.m. at Randall Reed Stadium (formerly Texan Drive Stadium) in New Caney.

It should be a battle of wills at the line of scrimmage between the Mustangs (9-1) and Brahmas (9-3) as both will try to move on to the next round.

However, this year’s version of the Brahmas has made a lot of noise down the stretch, winning five straight games.

Bellville’s only district loss came at the hands of Giddings 30-16. Giddings is facing Silsbee in the other Region III semifinal this week. The Brahmas district wins came against Smithville (23-20), Caldwell (27-7), LaGrange (52-27) and Brookshire-Royal (42-0).

There is no secret about what the Brahmas like to do and that is trying to run down opponents’ throats. Bellville will check into the battle averaging 339.5 yards a game, 291.2 of it via the ground game.

The Mustang defense, which is allowing a mere 188.3 yards a game and just 111.5 on the ground, will be honed in on a pair of youngsters, especially sophomore Bellville running back Richard Reece.

Reece has zipped, darted and bruised his way to a whopping 1,846 yards and 20 touchdowns on 235 carries.

Jasper is still looking for Reece’s license plate number after he shredded the Bulldogs for 308 yards and five TDs on just 22 carries. The week before against Wharton, he chewed up 257 yards and three TDs on just 20 totes.

Bellville quarterback Jake Lischka is just a sophomore as well. He has completed 36-of-75 passes for 581 yards with eight TDs and five interceptions. He has not been a threat to run much as he has 39 carries for a minus 41 yards for the season.

Another sophomore, Robert Briggs, has been versatile for the Brahmas. He has rushed for 833 yards and seven TDs on just 79 carries and is the team’s leading receiver with 15 catches for 267 yards and five scores.

Also, Bellville will get the ball to backs Kyle Peschel and Quaruante Butler, who have combined for 626 yards and seven TDs on 116 carries.

The Mustangs, District 10-4A champions, put together one of their most balanced nights of offense together against LaGrange last week. WO-S amassed 388 total yards, 203 on the ground and 185 in the air.

Mustang receiver Jalen Thompson (9-209-4) hauled in a pair of TD passes from Terrell last week and hauled in three receptions for 93 yards.

WO-S will look to continue to use Jayson Zeigler, Jr. in many ways. Zeigler, Jr. has 46 rushes for 269 yards and a pair of scores and leads the team with 21 receptions for 197 yards and three TDs.

The Mustangs have plenty of versatility as they will also look to get the ball to back JaQuailon Chaney along with receivers Jerrold Brown, Jr. and Andre Thomas.

The winner of the WO-S-Bellville battle will face either Silsbee or Giddings in the regional finals next week.