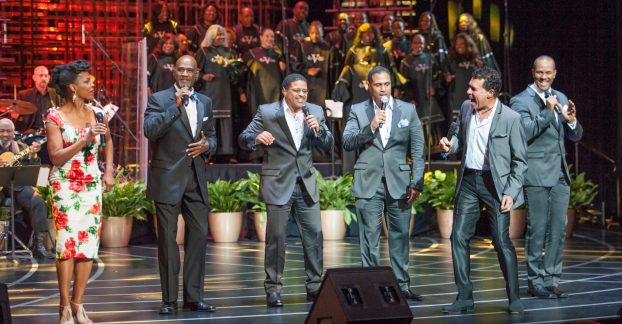 Photo courtesy of Lutcher Theater Nnenna Freelon, TAKE 6 and Clint Holmes perform What’d I Say during Georgia On My Mind a tribute to Ray Charles. The concert will be at Lutcher Theater at 7:30 p.m. Saturday, Nov. 23. For tickets, visit https://lutcher.org/

Tribute to Ray Charles brings memories, honors the music of an icon

A production from the stages of Las Vegas to the stage of the Lutcher Theater will excite and entertain this Saturday.

Claude McKnight, of Take 6, described it as a full show immersed in the music of Ray Charles.

Georgia on My Mind: Tribute to Ray Charles will be at Lutcher Theater at 7:30 p.m. Saturday, Nov. 23. For tickets, visit their website

Larry Rosen, of GRP Records, sought Take 6 when he had the idea of creating a musical tribute to Ray Charles.

“Rosen came to use with the idea,” McKnight said. “We are revamping the show for the tour and Texas is our first place on the tour.”

While parts of the show will feature Take 6’s talents as an a cappella gospel, the show will also include instrumental accompaniment.

The show includes other stars such as Nnenna Freelon and Clint Holmes.

Nnenna Freelon is an American jazz singer, composer, producer, and arranger. She has been nominated for six Grammy Awards for her vocal work.

It was during one the Dove awards when Orange Mayor Larry Spears Jr., first heard the a cappella gospel sextet perform.

“I was about 10 or 11 years old,” Spears said. “I saw them live and was overwhelmed and wanted to learn to sing.”

Spears added that to meet them as an adult and for them to come to Orange was ‘mind-blowing.’

Take 6 is familiar with Ray Charles’ music not just from the Vegas show but also from recording with him approximately 20 years ago.

“We had an amazing time with him,” McKnight said. “So, when we were asked about doing the show, it was a no-brainer.”

The performance will feature songs Ray Charles made famous.

Take 6, who just started working on a new album set to be released sometime next year, released their album ICONIC last year.

“The album included songs everyone knows, just as all Ray Charles songs are iconic,” McKnight said.

By Eric Williams The Orange Leader Orange Police are investigating a crash that claimed the life of a Nederland woman.... read more