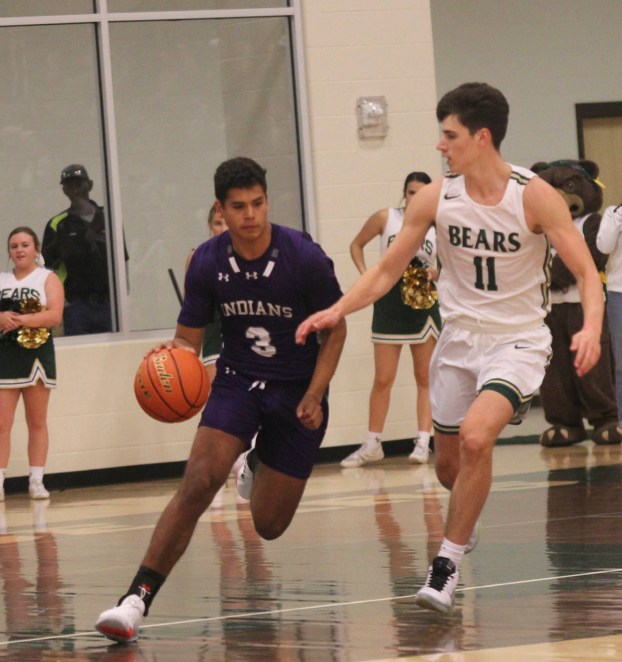 LITTLE CYPRESS – The Little Cypress-Mauriceville Bears got off to a fast start but Port Neches-Groves had a strong finish as the Indians defeated the Bears 55-50 in the season opener Tuesday night at The Grove.

LC-M raced out to a 12-2 lead in the first period but the Indians continued to whittle away and were able to tie it up at 29-29 by the half.

The Indians grabbed the lead 43-41 heading to the fourth quarter and then limited the Bears to just one field goal in the final eight minutes to hang on to the victory.

Jesse Doucette led the Bear attack with 17 points before fouling out early in the fourth quarter.

Jackson Smith had 13 points and four rebounds. Cole Freeman had eight points and Junius Stevens had five points and a team-high seven rebounds for the Bears.

Doucette and Cameron Prescott each had a three-pointer and Smith had two big buckets to give the Bears the early 12-2 cushion.

PN-G fought back to within six by the end of the first quarter at 12-6 then Indian Noah Marchak got hot in the second period. He tallied eight points in the quarter and drained two long-range three-pointers. The Indians also got a pair of buckets from Khristian Curtis and a three-pointer from Griffin Stein as they outscored the Bears 23-17 to tie things up at intermission.

Marchak tallied a game-high 17 points and grabbed five rebounds for the Indians. Curtis finished with 12 points and a game-high nine rebounds while Stein and Jackson Simmons scored seven points apiece for PN-G.

Doucette and Smith kept the Bears in the hunt in the third period as they teamed up for all 12 of the LC-M points. Marchak stayed hot for the Indians as well as he pumped in seven more points in the quarter.

Things tend to be a little sloppy in the first couple games of the season and that was evident with the turnovers. LC-M finished with 31 turnovers, 18 of them in the second half, while the Indians finished with 28 of their own.

The Bears return to action Friday when they visit Beaumont Kelly.

LITTLE CYPRESS – Suffering from a cold shooting second half, the Little Cypress-Mauriceville Lady Bears dropped a 36-31 decision to... read more