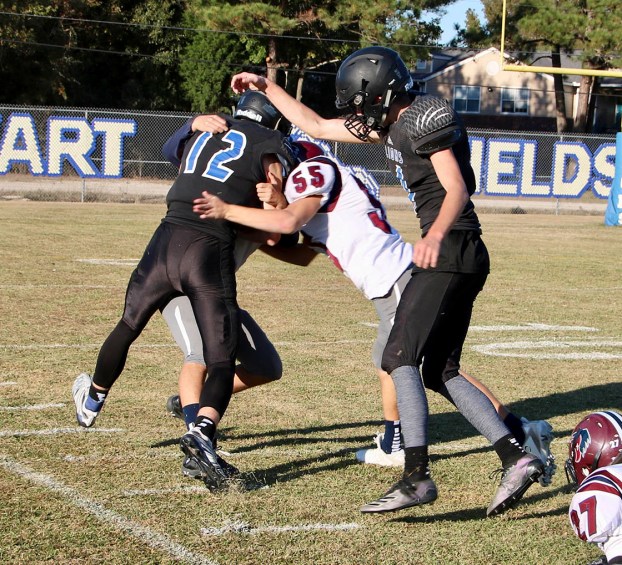 ORANGE – The Community Christian Lions hosted a Friday afternoon post season game on their home field against the Faustina Falcons and fell 82-35.

The Falcons won the coin toss and got set to receive the ball. The Falcons struck early with a rushing touchdown and a two point PAT for an eight-point lead.  The Falcons scored quickly again in the first quarter leaving the score at 16-0. The Lions answer with James Menard finishing a six-yard pass to Levi Rogers giving the Lions their first six points on the board. The 2 pt. conversion failed and the score was 16-6 at the end of the 1st quarter.
The Falcons started the 2nd quarter with a rushing touchdown and a missed pat. The Lions roared down the field but end up turning over on fourth down. Faustina Falcons score two more times before the Lions Menard completed a 20-yard pass to freshman Isaac Rizzato to put six more points on the board. Menard kicked  the PAT field goal to make the score 30-14. The Falcons then came on strong and the Lions were down 54-14 at the half.

After the half, the Falcons kicked off to the Lions, who marched down the field with Menard completing another 18-yard pass to Levi Rogers for a touchdown. The PAT pass to Rogers was complete to make it 54-23.

The Falcons continue to dominate the Lions. CCS Lions scored two more times with Menard again completing a five-yard pass to freshman Rizzato for the touchdown and Menard  completed a 12-yard pass to sophomore Bryer Grey for a touchdown as well. The PAT kick by Menard was good.

Under the new Head Coach Bryan Rawlins the Lions increases their total points for the year by 256 points. With only one Lion Senior Ryan Davis leaving the squad and developing five freshman (Isaac  Rizzato, Taylor Hogan, Gage Mott, Gunnar Sparks and Connor Dewberry) this year, Coach Rawlins looks to have an even better season next year with returning veterans James Menard, Levi Rogers, Bryer Grey and Zeppelin Rodgers.

“We came into the year with the expectation of building a foundation and we did exactly that; the future is bright for the CCS Lions Football”
The CCS Lions family and staff look forward to Coach Rawlins continuing to develop the football program next year!

KOUNTZE – The LC-M Lady Bears kicked off their basketball campaign with a 57-44 victory over the Kountze Lady Lions.... read more