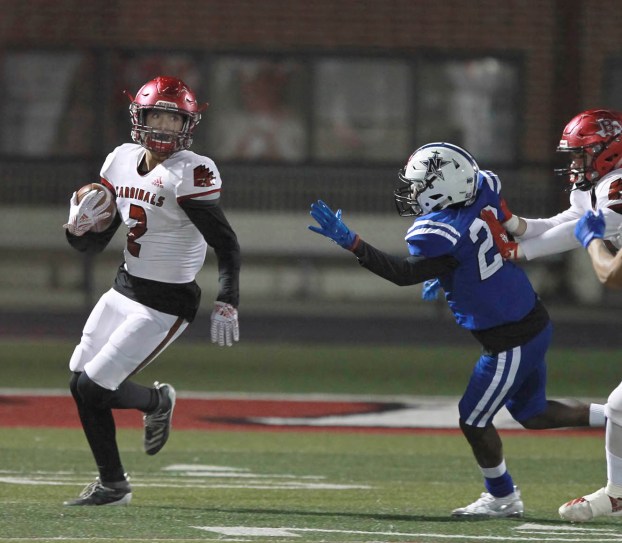 HUFFMAN – Jumping on Bridge City early by cashing in on turnovers and taking advantage of the legs of running back Darius Randle, the Navasota Rattlers ran past the Bridge City Cardinals 41-12 Friday night in Class 4A Region III Division I playoff action at Huffman Stadium.

Randle powered the Rattlers (7-4) early and often as he zipped for 177 yards and four touchdowns on 15 carries in the first half alone as Navasota took a 35-0 lead in to intermission. He finished with 178 yards and five touchdowns on 17 carries.

Five turnovers on the night proved costly for the Cardinals as well.

The District 12-4A Division champion Rattlers outgained the Cardinals (3-7) 297-27 in the first half.

The Rattlers took advantage of a turnover to score on their first series.

BC’s Harrison Gauthier fumbled the opening kickoff at the Cardinal 43.

The Rattlers scored five plays later when Darius Randle scooted up the middle untouched for a 27-yard touchdown gallop. Miguel Alvarado booted the extra-point as Navasota led 7-0 with 9:51 in the first quarter.

The Cardinals then dodged a bullet after Jackson Tims fumbled the ensuing kickoff at the Cardinal 31. The Rattlers moved all the way to the Cardinal 6 and Randle went around the left side for an apparent touchdown but it was called back due to holding. Alvarado came in and then missed a 33-yard field goal attempt.

The Rattlers scored the next time they got the ball, using a short field to go 31 yards in two plays, utilizing Randle.

Dyer teamed up with Randle for a 24-yard pass that got to the 7 and Randle finished it up with a seven-yard touchdown dart up the middle to make it 14-0 with 4:26 in the first quarter.

The Rattlers outgained the Cardinals 107-10 in the first quarter.

Utilizing another short field, the Rattlers navigated 24 yards in just three plays to go up 21-0 with 9:55 in the half as Randle capped off yet another drive with a 17-yard touchdown dart up the middle.

Navasota put together a quick three-play 79-yard drive to go up 28-0 with 6:37 in the half. Randle broke off a 44-yard gallop to the Cardinal 35 and two plays later Darick Henderson scooted 33 yards for a score.

After another Cardinal fumble, the Rattlers went 40 yards in four plays to hit paydirt again. Randle had a 32-yard run on the series and capped it with a five-yard touchdown run off left tackle to push it to 35-0 with 4:09 in the half.

The Cardinals had -13 yards rushing on 13 attempts in the first half as the Rattler defense sacked BC quarterback Colby Collins twice with big losses. Collins completed 4-of-8 passes for 40 yards in the half. Rylan Ply led the Cardinals with three receptions in the half for 27 yards while rushing for 14 yards on seven carries.

BC thwarted a Navasota drive with 1:37 in the half when Cardinal linebacker Dorian Pruitt picked off a Dyer pass at the BC 12 and returned it to the BC 31.

The Cardinals got on the board with a beautiful play with 5:27 left in the third when Collins hit receiver Jackson Tims in stride down the right sideline and Tims sped all the way to the end zone for a 54-yard touchdown. The Cardinals missed the extra-point and trailed 35-6 after the six-play, 67-yard scoring march.

Navasota’s Keith Steptoe picked off a Collins pass at the BC 20 and returned it to the 2 and Randle scored his fifth touchdown on the next play from two yards out, making it 41-6 with 0:17 left.

The Cardinals continued to scrap and they completed the game with a superb 12-play, 69-yard scoring drive capped off by a Collins five-yard touchdown pass to Andy Lara with 0:02 left.