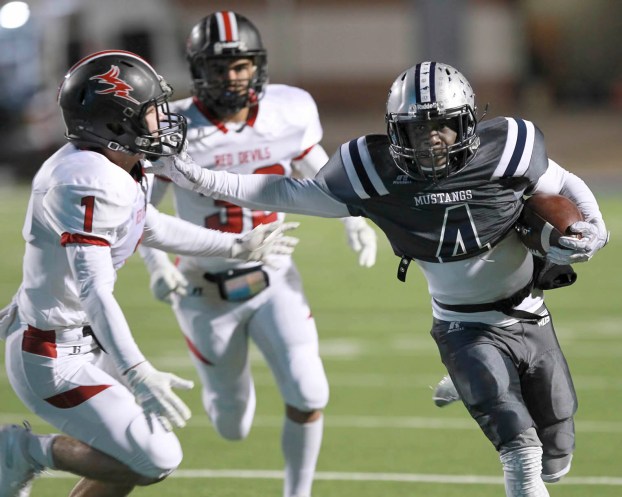 BEAUMONT – It was another walk in the park for the West Orange-Stark Mustangs in the bidistrict round of the Class 4A Region III Division II playoffs as they destroyed the Huntington Red Devils 56-7 at Beaumont Memorial Stadium Thursday night.

The Mustangs will now move on to face LaGrange (8-3) in the area round of the playoffs next week. La Grange nipped La Marque 12-7 Thursday night.

Huntington was the fourth-place team out of the five-team District 9-4A. Their only win was over Tarkington 28-6, which was good enough to get them in.

It marked yet another blowout win for the Mustangs in bidistrict over a bad opponent in the first round. In the last six years, the Mustangs have faced bidistrict opponents with a combined 9-54 record. The Mustangs have certainly kept their focus in each one of those affairs, having outscored them by a 386-10 total in those six games.

Mustang sophomore running back Elijah Gales had 109 yards and three touchdowns on just five carries in the first half. WO-S started Jayson Zeigler, Jr. at quarterback as regular starter Jerren Terrell got to rest and stay injury-free. The Mustangs outgained the Red Devils 289-176. Ten different Mustangs carried the ball and the defense brought back two interceptions back for scores.

The Mustangs wasted no time getting on the board as they zipped 50 yards in six plays on the first series of the game. Zeigler, Jr. had a big 21-yard keeper on the drive and Andre Thomas, Jr. had a 13-yard dart to the Red Devil 4. Elijah Gales had three carries for 16 yards on the march, including a four-yard touchdown run up the middle. Angel Ibarra booted the extra-point to give WO-S a 7-0 edge with 9:41 in the first quarter.

After holding the Red Devils to a quick three-and-out, the Mustangs hit paydirt again quickly with a three-play, 66-yard drive with Gales capping it with a 42-yard touchdown sprint off the left side to make it 13-0 with 7:29 in the first quarter.

Gales struck again on WO-S’ next series when he wrapped up a three-play drive with a 51-yard touchdown dart along the right side. Holder Jacob Dominguez then flipped a two-point conversion pass to receiver Jalen Thompson to up the lead to 21-0 with 4:15 in the first quarter.

Huntington was able to move the ball all the way down to the Mustang 14 with a 10-play, 72-yard drive that included a 48-yard pass connection between Chancelor and Austin Harris but Mustang Dontrey McClain thwarted the Red Devils’ opportunity when he stepped in front of a Chancelor pass and returned it 90 yards on the final play of the first quarter, pushing it to 28-0.

WO-S outgained the Red Devils 170-94 in the first quarter.

After Huntington punter Ayden Colbert was able to snag a high punt snap but had to eat it at the Red Devil 12, the Mustangs took over and scored two plays later when Hykiem Taylor zipped seven yards up the gut and into the end zone to make it 35-0 with 9:25 in the half.

Thomas Jr. put the Mustangs up 42-0 with 8:03 in the half when he stepped in front of an errant Chancelor pass and scooted 27 yards for a touchdown. Paulina Santos booted the extra-point for WO-S.

Mustang defensive back Jadon Jones picked off another Chancelor pass at the Red Devil 32 with 5:49 in the half and that is when the running clock began.

The Mustangs scored again two plays later when tailback Terry Harris bolted up the middle for a 33-yard touchdown scamper, making it 49-0 with 3:50 in the half.

The Mustangs outgained the Red Devils 214-84 in the first 24 minutes. WO-S had 201 yards on the ground on just 13 carries. Huntington had 16 carries for minus 11 yards. Chancelor completed 4-of-14 passes for 93 yards with three picks with Harris hauling in two of them for 57 yards.

Mustang tailback Jamaal Shaw scooted in for Mustang touchdown from 24 yards out on the last play of the third quarter.

The Red Devils were finally able to put something together late as that marched 70 yards in 12 plays with Andre Faulk capping it with a one-yard touchdown run with 3:32 remaining.

Chancelor completed 5-of-16 passes for 113 yards. Tanner Williams was the leading rusher for the Red Devils with 31 yards on six totes.

Franklin gets past Bobcats in bidistrict round

By Caleb Adams The Orange Leader   SHENANDOAH – A tremendous Orangefield season came to an end Thursday night as... read more