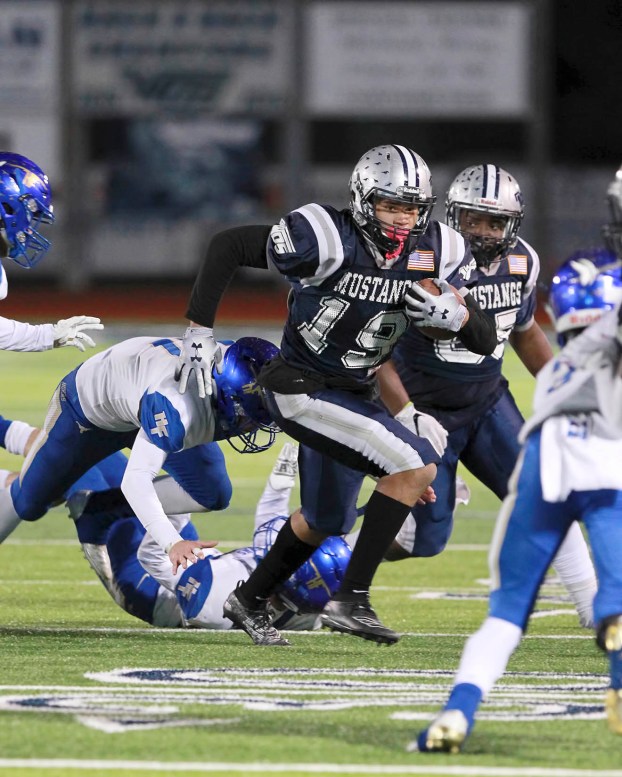 WEST ORANGE – Fresh off yet another district championship, the West Orange-Stark Mustangs are turning their focus on the Class 4A Region III Division II bidistrict playoff round this week as they will face the Huntington Red Devils Thursday at 7 p.m. at Beaumont ISD Stadium.

The Mustangs (7-1, 4-0) are coming off a dominating 42-7 victory over the Hamshire-Fannett Longhorns last week to seal the District 10-4A Division II crown again.

The biggest thing for the Mustangs this week is keeping their focus and their eyes on the prize as they will face the reeling Red Devils (1-9, 1-3), who will check into the playoffs with just one win, a 28-6 victory over the Tarkington Longhorns in District 9-4A Division II action that actually got them in the playoffs.

The Mustangs met the Red Devils in the same bidistrict round last year with WO-S rolling to a 76-3 victory in New Caney. The game had a running clock by the fourth quarter. WO-S had 601 total yards in the victory, including 498 on the ground, while limiting the Red Devils to 125 yards. The Mustangs led that game 48-0 at the half.

The Mustangs have once again been stingy on defense this season, limiting opponents to just 89 points for the season through eight games. In District 10-4A play, WO-S outscored its four foes 147-28.

WO-S quarterback Jerren Terrell went over the 1,000-yard passing mark last week against the Longhorns. He has completed 75-of-127 passes for 1,001 yards and eight TDs.

After winning three games last season, the Red Devils have captured just one this season.

After being outscored 295-79 in their six non-district tilts, the Red Devils were able to put together a solid game in their second 9-4A game to knock off Tarkington.

Huntington did return 17 starters back from last year’s 3-8 squad, including 1,000-yard back Andre Faulk. Sophomore quarterback Garrett Chancelor will look to guide the ship. Kenny Flood and Devin Luker will also see some touches out of the backfield.

The WO-S-Huntington winner will face either LaMarque (6-4) or La Grange (7-3) in the area round next week.

Bobcats will look to slow down Lions

ORANGEFIELD – Putting together one of the best seasons in school history, the Orangefield Bobcats will look to continue their... read more