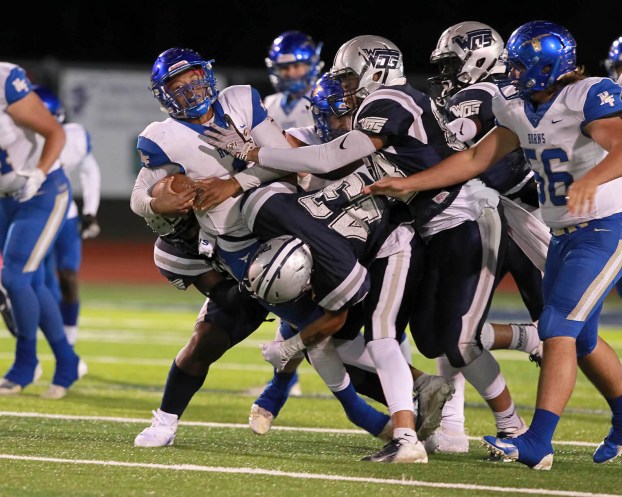 WEST ORANGE – Chalk up another District championship for the West Orange-Stark Mustangs as they hammered the Hamshire-Fannett Longhorns 42-7 Friday night at Hooks Stadium to finish perfect in District 10-4A Division I play.

The win pushes the Mustangs’ record against the Longhorns to 16-0 all-time and they have outscored H-F 755-99 in that span.

The Mustangs will now move on to the Class 4A Region III Division II bidistrict playoffs next week when they face the Huntington Red Devils, who got the fourth-place spot out of District 9-4A despite owning a 1-9 record.

WO-S finished with 313 yards of total offense. Quarterback Jerren Terrell completed 6-of-15 passes for 134 yards with two touchdowns and had two interceptions. Jalen Thompson hauled in three catches for 52 yards.

Running back Elijah Gales led the Mustang ground game with 75 yards on just 10 totes while Jayson Zeigler, Jr. had five rushes for 53 yards.

The Mustangs held down talented H_F quarterback Marcus Morris. Morris did have 82 yards rushing on 23 carries. He completed just 7-of-25 passes for 71 yards and was picked off twice.

The Mustangs took at 14-7 cushion into intermission after both defenses stood firm in the first half.

On the first series of the game, Longhorn linebacker Ross Owen picked off a Terrell pass at the Mustang 35 and returned it to the 30.

The Longhorns used 10 plays to navigate the yardage to find the end zone. The Longhorns elected to go for it on fourth-and-goal from the 4. Receiver Kheagian Heckaman, who had a big first down catch on the drive, lined up at quarterback and connected with Morris on a short screen to the left and Morris scooted in for a four-yard touchdown reception, Eddie Melendez booted the extra point as H-F snared an early 7-0 lead with 6:49 in the first quarter.

The Mustangs countered quickly though on their next possession, zipping 60 yards in just four plays. Terrell connected with Jerrold Brown on a huge 31-yard strike over the middle that got to the H-F 29. Three plays later Gales bolted right up the gut for a 25-yard touchdown gallop. Angel Ibarra booted the extra-point to tie things up at 7-7 with 5:03 in the first quarter.

H-F return man Tahji Edwards muffed a punt at the H-F 29 as the Mustangs took over with 1:21 in the first quarter after Courtney Davis was able to fall on the loose ball.

The Mustangs found the end zone again four plays later when Terrell hit receiver Jalen Thompson across the end zone for a 16-yard scoring dart, giving the Mustangs a 14-7 edge with 0:06 in the first quarter.

Morris saw a 25-yard touchdown run erased after the Longhorns were called for holding and the Mustangs held with 2:32 in the half.

Gales got loose on a 48-yard run to the Longhorn 27 but it was called back due to a holding penalty and Terrell was picked off by Heckaman at the H-F 46 with 1:06 left.

The Mustangs returned the favor when Mustang defensive back Artavious Samuel picked off a Morris pass in the end zone with 0:07 left.

The Longhorns outgained the Mustangs 150-130 in the half.

Morris rushed for 63 yards on 12 carries and completed 6-of-18 passes for 71 yards with receiver Anakin Hall hauling in three catches for 38 yards.

Gales had 49 yards on seven totes for the Mustangs. Terrell completed 3-of-11 passes for 66 yards.

WO-S wasted little time getting on the board early in the third. After holding the Longhorns to a quick three-and-out the Mustangs used a short field to their advantage when Terrell hit receiver Jayson Ziegler on a bubble screen to the left and Zeigler did the rest, sprinting 32 yards for the touchdown, putting the Mustangs up 21-7 with 10:20 in the third.

Jalen Thompson got involved as well on the defensive side as he put the Mustangs up 28-7 when he picked off a Morris screen pass attempt and zipped 52 yards for the interception return for a touchdown with 6:28 in the third.

The Mustangs put together a quick, four-play 57-yard drive to go up 35-7. Terrell connected with Thompson on a 32-yard strike on the series and Gales capped it with a 18-yard touchdown scamper around the left side with 0:07 in the third quarter.

The Mustangs kept rolling, scoring again midway through the fourth quarter. They put together a eight-play, 52-yard scoring march with Jayson Zeigler, Jr. finishing it with a 30-yard dash around the right end for a touchdown, making it 42-7 with 5:48 remaining.

By Caleb Adams The Orange Leader   ORANGEFIELD – The Orangefield Bobcats toppled the Anahuac Panthers 42-19 in Orangefield on... read more