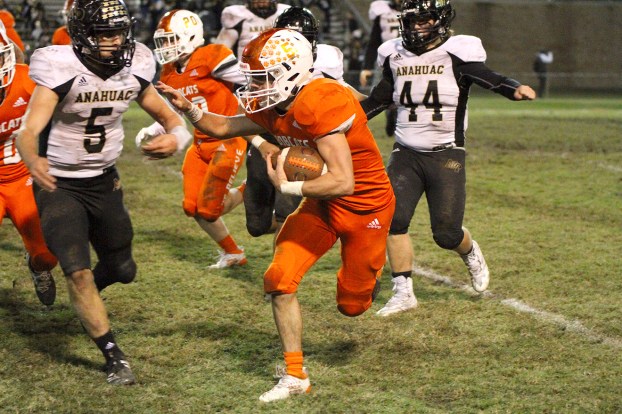 ORANGEFIELD – The Orangefield Bobcats toppled the Anahuac Panthers 42-19 in Orangefield on Friday night, to clinch the number two playoff seed out of District 12-3A Division I.

The defense and run game, as usual, prevailed for the Bobcats (9-1, 6-1) this game as they wrapped up a superb regular season.

The Bobcats will now move on to the Class 3A Region III Division I bidistrict playoffs next week as they will face District 11-3A third-place team Franklin (6-3).

After giving up the opening drive touchdown, the Bobcats defense really stepped it up and allowed their offense to run up the score early.

The Panthers (5-5, 5-2) would only get 15 yards rushing and a deceiving 145 passing. The Bobcats ability to stuff the Panthers when it mattered really shined this game.

The two interceptions by Dwight Davis and Clayson Choate, who would run it in for a score, really set up the offense for easy drives. The Bobcats ability to force turnovers and force punts was a big advantage heading into the playoffs if they continue to play this well.

The Bobcats really shined in all parts of the game thanks to a shifty Choate.

Choate, the return man for the Bobcats, would grab a big haul this game with an interception for a touchdown and a kickoff return touchdown, both in the first half. The game was out of reach for the Panthers without needing an offensive down to do it.

Orangefield’s offense would do it’s job on the ground, eating clock and getting points at the same time. Chase Broussard would lead the Bobcats on the ground with 63 rushing yards and a touchdown catch. The ability for the Bobcats to not have to rely on a single back is one of their offensive strengths. Ten different players would run the ball for the Bobcats making it difficult to pin down exactly how to defend them all game.

The Panthers got the game going with an opening drive touchdown. Quarterback Foster Kreuzer would take over the drive after completing a couple passes, including a 30-yarder to Zyon Clark. After the big pass Kreuzer would drive it in setting up the easy red zone score himself. After the PAT the Panthers led early 7-0 in the first quarter.

Choate broke open to tie the game on the kickoff, his third of the season. Choate would take the ball at the Bobcats 17, find the far sideline and wouldn’t stop until he crossed the end zone 83 yards later. After the PAT the game was tied at seven with just under eight minutes in the first quarter.

Broussard would find success on the next drive with a touchdown on the ground to cap off the drive. After a great stop by the Bobcats defense, the offense was set up in a great spot in the Panthers territory at the 40. Broussard would get the ball four times on the drive for 30 yards and the 11-yard touchdown run. After the PAT the Bobcats led 14-7 with 2:04 left in the first.

A designed quarterback keeper would extend the Bobcats early lead in the second quarter. After another great stop by the defense, the Bobcats got the ball on the 50 and made the drive count. Plowing the ball between the tackles, and finding holes to bounce it to the outside quarterback Gunner Jones would cap off the drive with a 13- yard keeper around the left side for six. The PAT wouldn’t go through but the Bobcats led 20-7 with 7:15 left in the first half.

Choate breaks off another touchdown, his second of the night and he did not even need to be on offense to do it. Choate would pick Kreuzer at the 50-yard line, reading the pass perfectly, and weaved his way to the end zone for the score. After the two- point conversion from Broussard, the Bobcats lead 28-7 with five minutes left in the half.

The Bobcats ran the ball down the Panthers throat, and then scored on a surprise pass over the middle to extend the lead. After Hunter Ashworth, who finished with 62 yards on the ground broke two big runs for first downs the Bobcats found themselves in the red zone again. Jones would fake a run and dump the ball over the middle for a 16-yard pass to Broussard for the touchdown. After the PAT the Bobcats led 35-7 with 1:30 left in the first half.

The Panthers earned their first touchdown since the first quarter, finding success through the secondary with a big pass to score. Foster Kruezer chunked it down the field for Zyon Clark, hoping he can go up and get it. After the pass was bobbled, Clark maintained possession and was able to run for an additional 30 yards to score a 52- yard touchdown. The 2-point conversion would not go in and the Bobcats lead was shrunk to 35-13 with 11 minutes left in the game.

The Bobcats spreaded the ball around on the next drive, using the running game to extend their lead even further in this all important district game. A variety of running backs got the ball, using Kadeon Evans to punch the points through once inside the five-yard line. After the PAT the Bobcats would lead 42-13 with eight minutes left in the fourth quarter.

The Panthers scored again thanks to Kreuzer’s ability to keep the play alive. Kreuzer would find Clark for two more big passes, for 15 and 21 yards, to set the team up in the red zone. Kreuzer would finish the drive with a QB keeper around the outside to score. The 2-point conversion would be no good and the Bobcats would lead 42-19 with 4:25 left in the fourth quarter.

The Bobcats would wrap the game up with a pretty bow in the victory formation.

Lady Bears zip past Bay City in area round