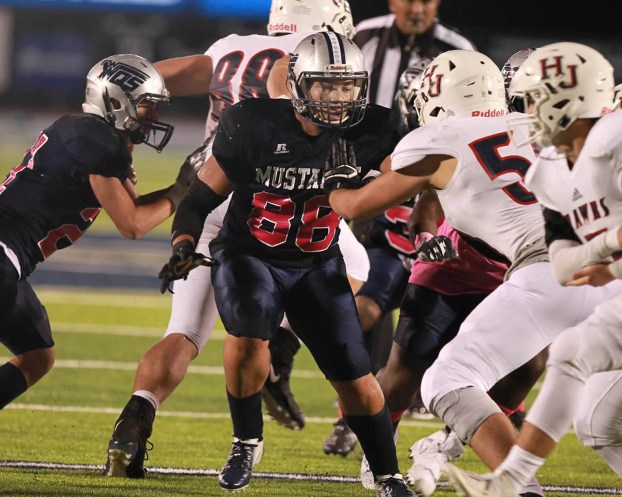 WEST ORANGE – Going for another outright District 10-4A Division I title Friday night, the West Orange-Stark Mustangs will have to battle off some pesky Hamshire-Fannett Longhorns at Hooks Stadium.

The Mustangs are coming off one of their most dominant defensive performance of the season after roughing up Liberty 29-0 on the road last week. The Mustangs limited the Panthers to 99 yards, all on the ground, on 54 carries.

Meanwhile, the Longhorns (6-2, 2-1), who have played so hard this season for second-year head coach Mark Waggoner, dropped a hard-fought down-to-the-wire 27-21 decision to the Silsbee Tigers last week.

There is no doubt that the Mustang defense will be honing in on outstanding Hamshire-Fannett quarterback Marcus Morris.

Morris has picked off from where he left off last year in which he rushed for 1,569 yards and 16 touchdowns and passed for 1,240 yards and 13 scores.

The Longhorn offensive line will look to protect Morris from a hard-charging WO-S defense.

When Morris isn’t running or throwing the leather, he will get the ball to backs Jordan Joiner, Jaden Zeno and Kyle Saurage and he also likes to get the ball to receiver Evan Viator.

The Mustangs will look to continue to be steady on offense with a lot of weapons.

The Mustangs have dominated the all-time series against the Longhorns, holding a 15-0 series lead and have outscored Hamshire-Fannett 713-92 in the process, including 34-10 last season.

Bears to battle Raiders for second

LITTLE CYPRESS – Though they have fallen just short of a District 11-4A Division I title in a tough loss... read more