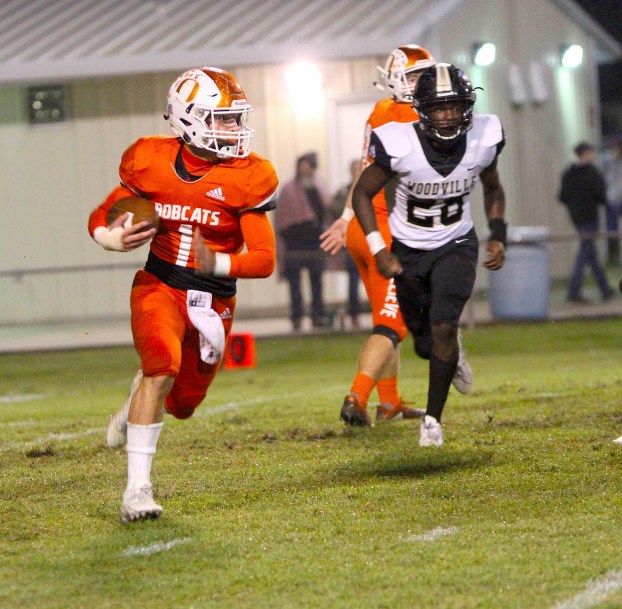 ORANGEFIELD – Looking to put a bow tie on one of their best regular seasons in years, the Orangefield Bobcats will welcome in the Anahuac Panthers Friday night in a showdown for the second-place playoff berth out of District 12-3A Division I.

Anahuac took awhile early in the season to get accustomed to first-year head coach Greg Neece’s system, but once the Panthers did they took off.

The Panthers dropped all three of their non-district encounters to Tarkington (53-28), Edna (48-33) and Bridge City (35-21) and then reeled off five straight 12-3A victories before falling to East Chambers last week.

Anahuac will be heading into their second week in facing the top two defenses in the district in East Chambers and Orangefield.

The Bobcat defense, will certainly be turning their focus on Anahuac dual-threat quarterback Foster Kreuzer. Kreuzer has rushed for 886 yards and 16 touchdowns on 100 carries and has completed 36-of-83 passes for 624 yards and eight scores.

Anahuac also has a feature back in Landon Fanus. Fanus is closing in on 1,000 yards as he has 918 yards and eight TDs on 149 totes.

The Bobcats churned out 313 yards on the ground in their win over Warren last week. Chase Brossuard and Heston Puckett each had 100 yards. Broussard zipped for 113 yards and two TDs on 12 carries while Puckett rumbled for 100 yards on eight totes.

Broussard now has 632 yards and eight TDs on 73 carries while Puckett has rumbled for 566 yards and four TDs on 88 carries.

The Bobcats have been so balanced in utilizing a plethora of backs. Orangefield’s offensive line deserves a ton of credit for helping the offense move the chains.

Hunter Ashworth (54-398-6) has had some big moments toting the ball this season as well as quarterback Gunner Jones, Clayson Choate, Kent Michael and Kadeon Evans.

The Bobcats would love to clinch the second-place playoff berth and will also be seeking a little redemption after they fell to the Panthers on the road last season 35-17.

WEST ORANGE – Going for another outright District 10-4A Division I title Friday night, the West Orange-Stark Mustangs will have... read more