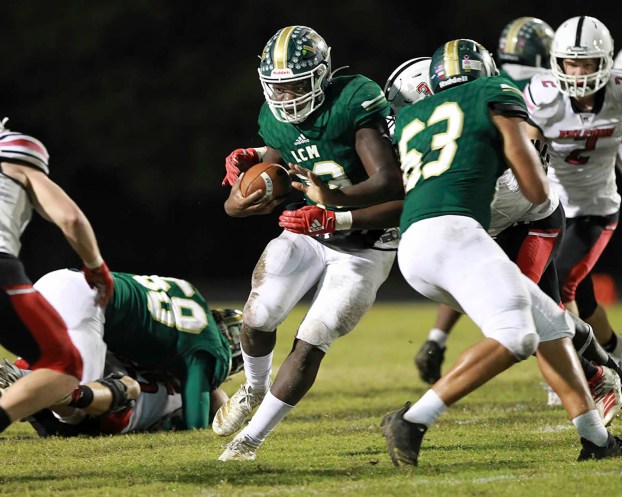 Bears to battle Raiders for second

LITTLE CYPRESS – Though they have fallen just short of a District 11-4A Division I title in a tough loss to Huffman last week, the Little Cypress-Mauriceville Battlin’ Bears have a ton to play for this week with a trip to Lumberton to face the Raiders.

A Raider win over the Bears could force a two-way tie or three-way tie for second-place if Splendora (5-3, 2-2) defeats Bridge City Friday.

Both teams are seeking to bounce back this week. The Raiders fell to Splendora 14-7 on the road last week.

The Raiders will check in with a strong Slot-T offense and a plethora of backs to get the leather to.

Quarterback Drake Boykin spearheads the Raider offense. The Raiders have three tailbacks and halfback that they like to get the ball too including Clay Jenkins, Blaine LeBlanc and David Barthol along with fullbacks Adam Sellers and Skylar Hussey.

The Bears fought district champion Huffman hard last week, battling to the end after a slow start that saw them trailing 28-0.

Bear standout senior quarterback Ethan McCollum had another big night as he passed for 169 yards and rushed for 86 more against the Falcons. McCollum now has 1,159 yards passing for the season and has rushed for 797 more.

The Bears will look to take advantage of the Lumberton secondary with strong receivers in D.J. Williams, Brendon Pollock and D.J. Spears.

The Raiders are stout on the defensive front, led by All-District defensive tackles Waylon Drake and Champ Roach.

The Bear defense definitely shined in last season’s 18-0 home win over the Raiders. They outgained the Raiders 242-103 and held the vaunted Raiders ground game to a mere 84 yards on 33 carries.

BRIDGE CITY – Going into their regular season finale, the Bridge City Cardinals have a lot to play for as... read more