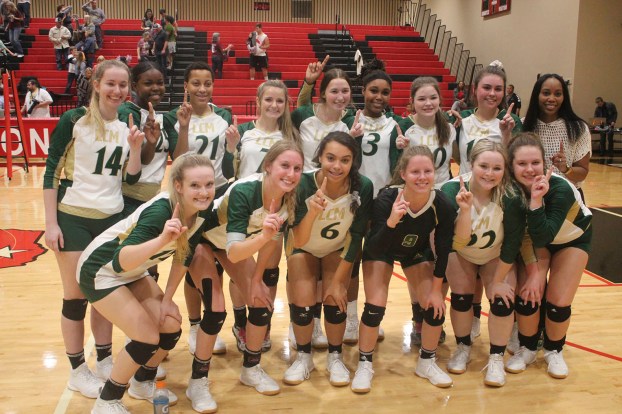 Van Wade/Orange Leader The LC-M Lady Bears celebrate with a team shot after downing Tarkington in the bidistrict playoffs In Kountze.

Lady Bears turn back Tarkington in 5

Fans of the Little Cypress-Mauriceville volleyball team certainly can after they watched the L         ady Bears dispose of the Tarkington Lady Longhorns in a hard-fought, five-game Class 4A Region III bidistrict playoff game Tuesday night at Kountze High School.

Tarkington had more kills than the Lady Bears on the night with a 59-43 edge but it was the number of shots the Lady Bears dug up led by “digging machine” Brielle Butler along with Trinity Williams, Zoe Levens and Caitlyn Woods.

The LC-M win offset a huge hitting performance from Tarkington’s Sydney Whitmire, who piled up a match-high 23 kills. Jade West had 16 kills for the Lady Longhorns.

The Lady Longhorns snagged Game One by going on a 11-2 run to finish it.

LC-M bounced back in Game Two, leading most of the way, then closing it with a 6-1 run.

It looked as if Tarkington was going to cruise to a big Game Three win, leading by as much as 17-10. However, the Lady Bears turned the game around as well as the match.

Williams caught fire with her serve as she served up seven straight points, including three aces as the Lady Bears were able to go up 18-17. The Lady Bears led 22-20 and then finished it with the final three points to complete a 15-3 spurt.

Game Five was all about the Lady Bears. They raced out to an 8-3 lead. Tarkington managed to trim it to 11-7 but that would be as close as the Lady Longhorns would get as LC-M powered their way to the last four points, including two kills from Perry.

Williams added four kills for the Lady Bears while Olivia Hogan had three and Woods and Levens added two apiece.

Parker Lewis had 10 kills for the Lady Longhorns while Emily Lowe contributed seven.

Lady Bobcats fall to Diboll in 4