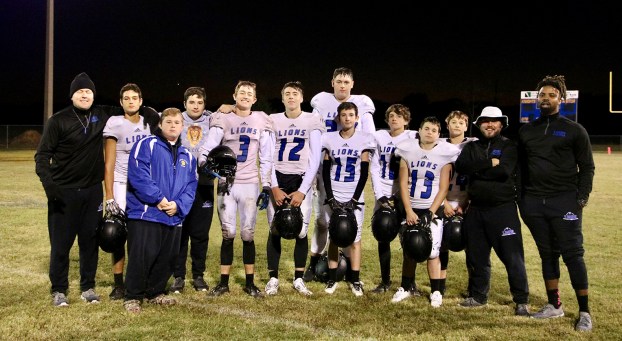 Special to the Leader by June Menard

The Lions had a very impressive outing , with every Lion playing to the best of their ability as the Lions roared to a 52-6 victory.

The Lions won the coin toss but chose to defer to the Knights to establish a strong defensive game up front. The Knights tried to march down the field but met a tough defensive front from the Lions.  Stops were made by freshman Isaac Rizzato, sophomore Bryer Gray, juniors James Menard and Levi Rogers and senior Ryan Davis on the Knights first series.
The Lions came out strong when quarterback James Menard handed off the ball to Bryer Gray to gain yardage to get the first down. James Menard then passed to Ryan Davis to gain more ground. On fourth down Menard passed to Gray who ran in the first Lions touchdown to put 6 points on the board. James Menard then completed PAT field goal for another 2 points making the score 8-0.
In the second Lions defensive series, the Knights got stopped on third down with an interception from freshman Isaac Rizzato. After a run from Gray and one from Menard, QB Menard connected with Rizzato for a touchdown. Menard kicks a PAT making the score 16-0.
On third series for the Knights, Rogers strips the ball from the Knights forcing a turnover midfield. QB Menard hands off to Gray for a 15-yard run and on the next play through a double exchange Menard runs in the ball for a touchdown. PAT by Menard was off to the left of the uprights making the score 22-0.
In the next series the Knights fell short again after the Knights lost the ball and the Lions recover.
Still in the second quarter, Menard hands off to senior Ryan Davis who runs a crossing route to the 5-yard line. On the next down Menard carries to the 2 then passes it to Rogers in the end zone  for another Lions score. After a fumbled snap Menard throws the ball again to Rogers in the end zone on the PAT making the score 29-0.
The Knights, hoping for a better series on offense struggled once again when Bryer Gray stopped the Knights after a short 2 yard gain. On 4th down and 24 Yards to go the Knights QB attempted a pass but instead met high jumping Lions QB James Menard who picked off the ball and ran through several Knights players  for a Lions touchdown. Once again Menard booted the ball through the uprights giving the Lions a 37-0 score with 4:24 left in the second quarter.
The Knights had a quick three and out with the Lions defense making stops with no gains , the Knights were forced to kick off to the Lions again. On the Lions first down QB Menard lost the ball on the snap giving the Knights their first real opportunity for the evening. On first down the Knights QB heaved the ball down the field to his receiver and the Knights scored their first and only touchdown of the night. The PAT was no good leaving the score at  37-6.
Late in the second quarter the Lions used several players to again gain yardage. Rizzato carried for 15 yards, Gray carried for 20 yards., Davis carrying for 10 yards and with a double exchange to QB Menard for the rushing touchdown to score 6 more points putting the Lions on top 43-6 at the half.
The Lions had the ball after the half and went a quick three and out. The Knights came out after the half with their own quick three and out, leaving the Lions working for an early end to the game . Rizzato, Gray, Rogers and Menard all carried the ball to march up the field with a pass to Rizzato for the touchdown. Menard’s PAT was good for 2 giving the Lions the 52-6 win. In six man football the game ends if it is halftime or any play after that when a team is up by 45 points.
First year Head Coach Bryan Rawlins said “My guys were outmatched in size but they are truly Lions”.
This game clinched the playoffs for the Lions, giving them a extra week to prepare for round one of play-offs.