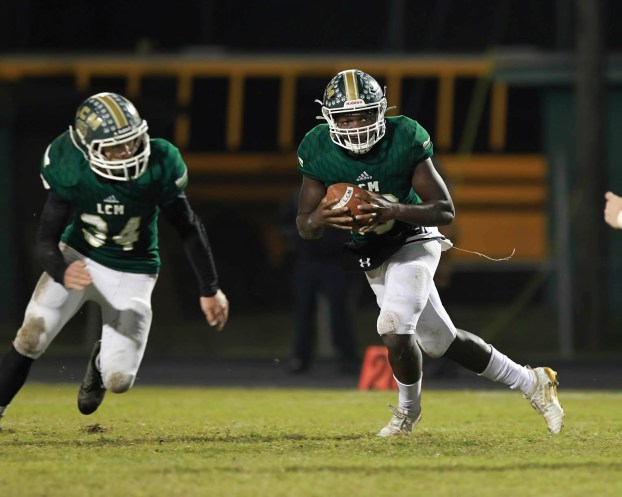 LITTLE CYPRESS – Getting off to an explosive start and utilizing the legs of senior workhorse back AJ San Miguel, the Huffman Falcons clinched the outright District 11-4A Division I title Friday night by downing the Little Cypress-Mauriceville Battlin’ Bears 34-14 at Battlin’ Bear Stadium.

Miguel finished with 177 yards on 32 tough carries. Huffman quarterback Justin Shively completed 13-of-21 passes for 185 yards, throwing for a touchdown and running for another. Peyton Pierson had five catches for 58 yards and Luke Thomas had four catches for 59 yards.

McCollum completed 17-of-31 passes for 169 yards and rushed for 86 yards on 25 totes. Bear receiver D.J. Williams had a big night, hauling in nine catches for 107 yards.

The Bears have already clinched a playoff berth. They can earn the second-place playoff seed outright next week if they can win on the road at Lumberton. Lumberton (5-3, 2-2) fell to Splendora (5-3, 2-2) 14-7 Friday.

The Bears dug themselves an early 28-0 hole but battled back to within 28-14 at the half.

The Falcons marched 87 yards in eight plays to hit paydirt on the first series of the game.

Shively connected with receiver Luke Thomas on two passes for 35 yards and hit Peyton Pierson on a great pass down the right sideline that got to the Bear 6. San Miguel capped it when he went six yards up the middle for the score. Jackson Landry booted the extra-point, making it 7-0 with 8:59 in the first quarter.

Huffman navigated 73 yards in 10 plays on their next possession to go up 14-0. Shively connected with Thomas for a big 21-yard gain down the left side that got to the Bear 13.. Three plays later San Miguel scored again, going four yards up the middle with 4:18 in first quarter.

Huffman linebacker Noah Zamora picked off McCollum at the Falcon 45 and returned it to the Bear 25 with 3:11 in first quarter. The Falcons scored three plays later when San Miguel bolted around the left side and went 17 yards for the touchdown, pushing it to 21-0 with 2:25 in the first quarter.

The Falcons outgained the Bears 170-7 in the first quarter.

Huffman went on a eight-play, 70-yard scoring drive early in the second quarter.

Shively hit Zamora on a big 39-yard pass play over the middle that got to the Bear 20. Four plays later Shively found Pierson streaking over the middle of the end zone for a 12-yard scoring strike, making it 28-0 with 6:04 in the half.

The Bears got on the board with 3:53 in the half when LC-M defensive end Nicholas Granger picked off a Shively screen pass and returned it 23 yards for the score. The extra-point kick was blocked as the Bears trailed 28-6.

Following the touchdown the Bears tried an onside kick and were successful as Williams fell on the loose ball at the Falcon 45.

Williams then hauled in two passes from McCollum for 39 yards including a beautiful 34-yard hookup down the left sideline for a touchdown. Carson Peet then hit Pollock on a perfectly-executed two-point conversion pass to trim it to 28-14 with 2:39 in the half.

McCollum completed 11-of-19 passes for 112 yards in the half while rushing for 60 yards on 11 carries. Williams hauled in five passes for 64 yards.

Shively completed 12-of-18 passes for 163 yards in the half. San Miguel had 110 yards on 18 carries on the ground while Thomas had four catches for 59 yards and Pierson four grabs for 51 yards.

The Falcons put together a 10-play, 73-yard drive late in the third quarter with Shively finishing the march off with a five-yard quarterback keeper for the score. The extra-point kick failed as the Falcons led 34-14 with 1:32 in the third.

After the Bears drove 69 yards to the Huffman 1, the Falcon defense rose up and kept LC-M out of the end zone as McCollum threw an incomplete pass on fourth down with a close to nine minutes left.

The Falcons return home to face Livingston next week to try and complete a perfect regular season.