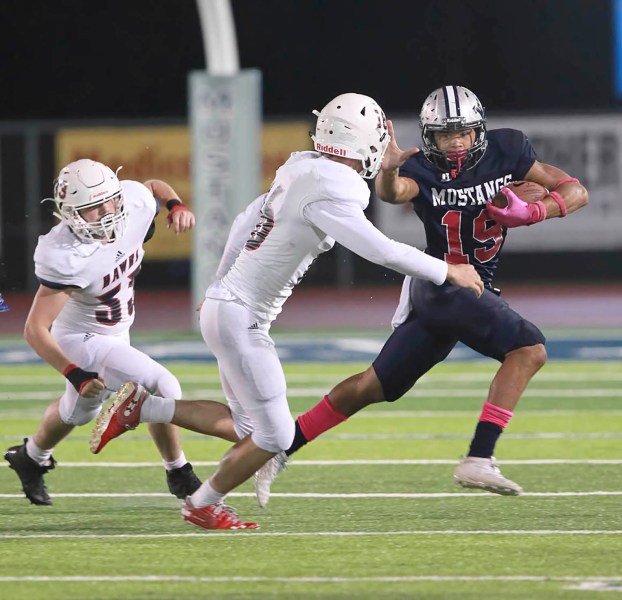 Mustangs set for trek to Liberty

WEST ORANGE – The West Orange-Stark Mustangs will continue their quest for yet another district title Friday night as they will hit the road to face the Liberty Panthers in District 10-4A Division II action.

The Mustangs (5-1, 2-0) were able to shake off some rust last week after their bye week to explode past Hardin-Jefferson 49-12.

The Mustangs have been dominant on defense once again this year, especially the last two weeks. In their huge 17-9 10-4A opening win at Silsbee, the Mustangs held the explosive Tigers to just 202 yards and limited the Hawks to just 146 last week. WO-S is now allowing just 202.2 yards a game this season.

The Panthers will look to slow the game down with their grind-it-out Double-Wing Offense in which they love to run the ball with a lot of different options.

Sophomore quarterback Austin Walker helps guide the offense as he looks to get the ball to senior fullback Jordan Leday and tailback John Harris-Hines. The Mustang defense is allowing just 132 rushing yards a game.

The Mustang offense will look to hit the Panther defense with some big plays with their spread offense.

Mustang sophomore running back Elijah Gales scored on nearly half of his touches against H-J last week. He rushed for 174 yards and five touchdowns on just 11 carries against the Hawks. Gales now has 779 yards and 13 TDs on 92 carries for the season. Fellow backs sophomore JaQualion Chaney (24-162-3) and senior Terry Harris (12-115-1) also provide a spark.

The Mustangs downed the Panthers 33-24 at Hooks Stadium last year despite being outgained 378-295 but WO-S was able to cash in on some big turnovers to pull it out.

Liberty will venture to Hardin-Jefferson next week.

Bobcats will venture to Warren

ORANGEFIELD – In another game they can’t look past, the Orangefield Bobcats will hit the road Friday night to take... read more