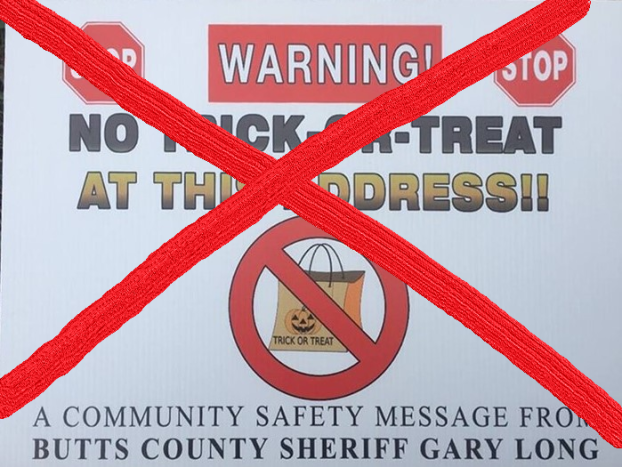 Raleigh, North Carolina—On October 29, 2019, the U.S. District Court for the Middle District of Georgia validated a complaint filed against a Georgia sheriff who intended to repeat his office’s previous Halloween practice of placing warning signs in the yards of registered citizens throughout Butts County.

In a 25-page order granting a preliminary injunction against Butts’ County Sheriff Gary Long and other county officials, federal Judge Marc T. Treadwell agreed with the complainants that placing signs on their private property violated their constitutional rights. Sheriffs and county officials “should be aware that the authority for their blanket sign posting is dubious at best and even more dubious if posted over the objection of registrants,” wrote Judge Treadwell.

This legal action was initiated and financed by the National Association for Rational Sexual Offense Laws (NARSOL). NARSOL has also delivered a warning letter to Sheriff Lee Cone of Ben Hill County who is erecting signs on the property of registered sexual offenders for Halloween.

“If these signs are not gone by Halloween, Sheriff Cone can expect to be on the receiving end of the same litigation that Sheriff Long just lost,” said Brenda Jones, NARSOL’s executive director.

Mark Yurachek, lead counsel in the Butts and Spalding County cases, stated “While there is not a single party to this suit who is not extremely concerned about the safety of the children in this and every other community, allowing a law enforcement officer to exceed already substantial lawful authority in order to violate private citizens’ constitutional rights for that or any other purpose is a short term action with dire long term consequences.”

“We are gratified that the court clearly sees the constitutional violation inherent in Sheriff Long’s actions,” stated Brenda Jones. “He was warned by the court to consider carefully before he continues placing signs. If he does continue, he will have to run over us.”

Recent years have seen an increase in activity in states that seeks to limit the ability of registered sexual offenders from fully reintegrating into their communities and participating in social life as full-fledged citizens.

“We are putting them all on notice,” Jones continued. “They will be challenged every time they start threatening the constitutional rights of registered citizens. These types of illegal impositions on registered people and their families will no longer be tolerated. These rogue sheriffs need to be prepared because we are watching, and we are ready for them.”

NARSOL opposes dehumanizing registries and works to eliminate discrimination, banishment, and vigilantism against persons accused or convicted of sexual offenses through the use of impact litigation, public education, legislative advocacy, and media outreach in order to reintegrate and reconcile affected individuals and restore their constitutional rights.

From staff reports AUSTIN, Texas – Renters in Texas counties whose homes and property were damaged during Tropical Storm Imelda may... read more