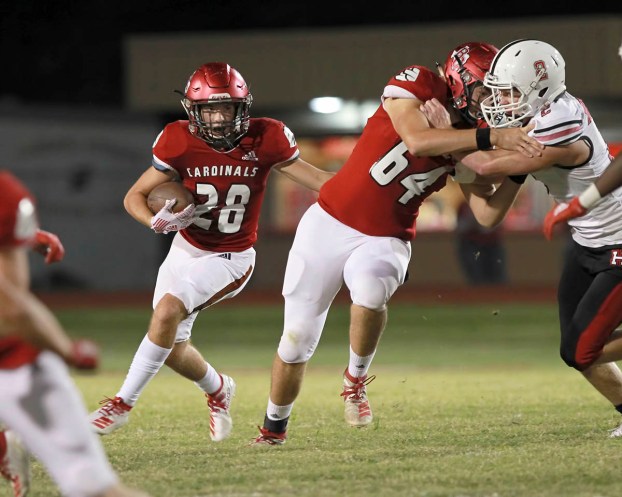 Cardinals seek 11-4A win at Livingston

BRIDGE CITY – One team is going to walk away from Lions Stadium Friday night with their first District 11-4A Division I win of the season as the Bridge City Cardinals (1-6, 0-3) make the long road trek to face the Lions (3-4, 0-3).

Both teams have struggled with two games remaining in 11-4A play.

The Cardinals are coming off a tough 29-0 road loss at the hands of the Lumberton Raiders.

The two Lions’ wins this year came against Shepherd (32-28) and Huntington (36-0) while Bridge City downed Anahuac 35-21 in non-district for their win.

The Cardinals will look to get their offensive on track after suffering several tough turnovers in losses against Lumberton and Huffman the last two weeks.

Sophomore quarterback Ethan Oceguera spearheads the Cardinal offense and has had some good moments this season, including a 152-yard rushing effort against Anahuac and a 222-yard, two-touchdown passing performance against Huffman.

The Cardinals will also look to get a spark from their running game led by tailback Rylan Ply and fullback Andy Lara.

Oceguera has some solid receivers to get the ball to as well in Jackson Tims and Colby Collins.

The Lions are sparked by the legs and feet of quarterback Damien Ruiz, who has shown some nice speed in breaking off some long runs this year.

Livingston has a pair of nice backs Debrian Rains and Keon Perkins with Cody Dupas also seeing some touches.

Ruiz has nice options at receiver in Julian Gardner and Chris Washington and a nice tight end in Jaylen Harrell.

The Cardinals dominated the Lions at Larry Ward Stadium last season, winning 28-7. The Cardinals had 288 total yards and were stingy on defense, limiting Livingston to just 126 yards.

The Cardinals will host Splendora next week while the Lions visit Huffman.

ORANGEFIELD – Getting their final tuneup before heading to the Class 3A bidistrict playoffs next week, the Orangefield Lady Bobcats... read more