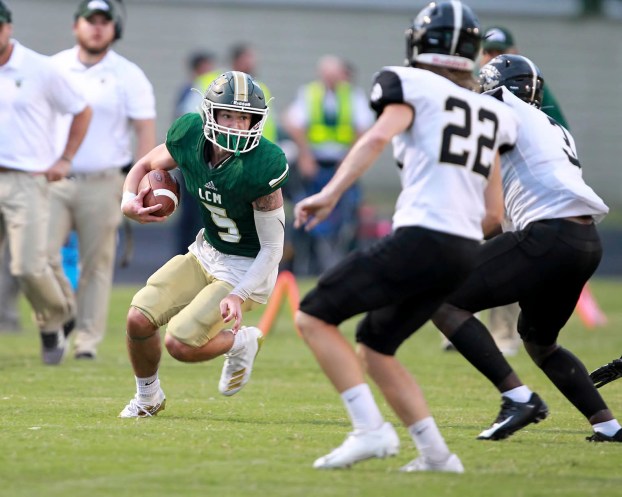 Bears hosting Falcons in 11-4A showdown

LITTLE CYPRESS – There will be a huge game awaiting the Little Cypress-Mauriceville Battlin’ Bears Friday night as they welcome in the undefeated Huffman Falcons with possible District 11-4A Division I title implications on the line.

Both teams will check in with perfect 3-0 11-4A marks as the Bears (5-2) and Falcons (8-0) have really controlled each of their opponents early in 11-4A games and have cruised to victory.

LC-M, meanwhile, had a much stronger non-district schedule than the Falcons, that included tough losses to 4A Division II powers WO-S and Jasper that definitely helped the Bears get ready for district play.

Both teams certainly control their own destiny as the Bears are in the hunt for their first district crown since 1994.

Both teams enter the game with high-octane offenses in their spread formations.

Miguel has been a workhorse this season and has already crossed the 1,000-yard mark after zipping for 1,645 yards last season.

Shively passed for almost 2,300 yards last season and has had a solid senior campaign as well.

He has three excellent receivers to get the ball to in All-District receivers Noah Zamora and Peyton Pierson along with Luke Thomas.

Both teams have jumped on opponents early with big leads in 11-4A play. Both the Bears and Falcons have come up with huge turnovers that produced scores or lead to short fields for their offenses to finish the job.

LC-M has been excellent in cashing in on turnovers in district play. Shively will try to get passes by a stout LC-M secondary sparked by the likes of D.J. Williams and Ken’teon Champine.

Finishing the job is certainly what LC-M senior quarterback Ethan McCollum has done in 11-4A play.

Last week against Livingston, McCollum shredded the Lions for 223 yards rushing and 146 passing. In the three LC-M 11-4A wins, McCollum has rushed for 451 yards and has passed for 399 and has 990 yards passing and 711 yards rushing for the season.

McCollum has sure-handed receivers to get the ball too in D.J. Williams, Brendon Pollock and D.J. Spears.

Senior running back Landon Bearden has also had big moments in moving the chains, sharing the running load with McCollum.

The Falcons defeated the Bears 26-12 last season in Huffman. Shively passed for 256 yards while San Miguel chewed up 176 yards on 26 carries on the ground.

The Bears will face a tough road test at Lumberton next week as the Raiders (5-2, 2-1) are still in the title hunt while the Falcons return home to face Livingston.

Mustangs set for trek to Liberty

WEST ORANGE – The West Orange-Stark Mustangs will continue their quest for yet another district title Friday night as they... read more