And Now You Know: The biggest Orange Tiger game of 1939 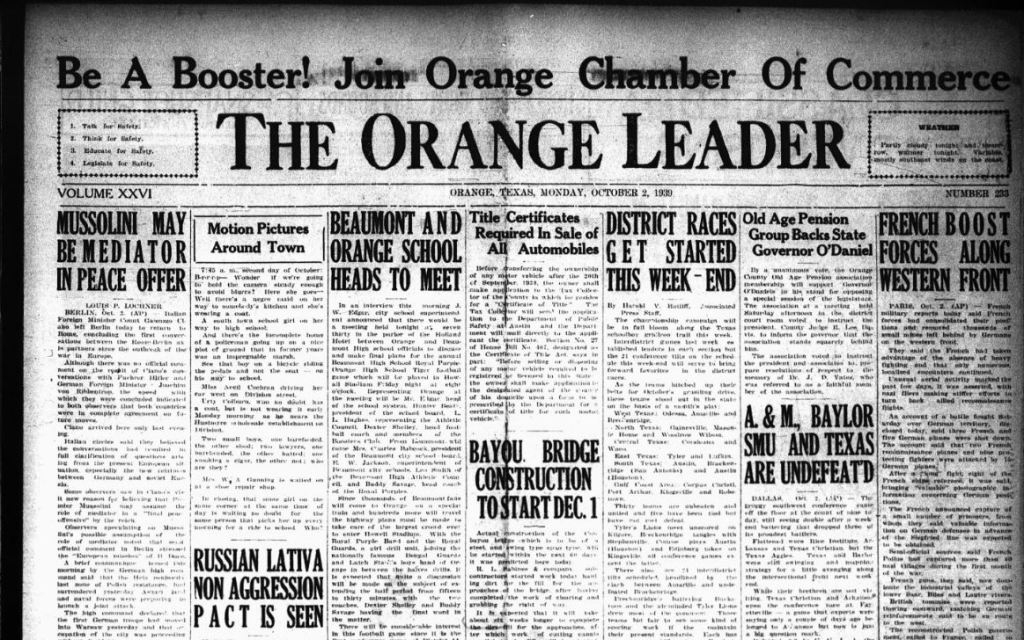 “Beaumont and Orange School Heads to Meet” was not the biggest headline in the Orange Leader October 2, 1939 edition, but it was the one that caught the most interest.

It was referring to the upcoming game between the Orange High School Tigers and the Beaumont High School Royal Purples. It would be the first district game of the season and it would be heavily attended.

In addition to strong football teams, both schools had outstanding bands and drum and bugle corps.

The meeting between the “school heads” was to settle the details of the game. The normal starting time of the games was 8 p.m., but the Beaumont teams and fans would not be able to arrive in Orange before 7:30.

Those at the meeting would discuss pushing the starting time back. Since both schools had outstanding drum and bugle corps, there would also be a discussion about extending the half time by 15 minutes to give the bands and drill teams more time to perform.

In his Orange Leader sports column, “Sideline Slants”, Frank Maxwell wrote: “District 14AA conference play begins this Friday night in Howell Stadium. The Orange Tigers meet the Beaumont High Royal Purples. A capacity crowd is expected for what is sure to be a hard-fought contest.”

The next day, October 3, The Leader reported; “Grid Game Friday Looms to be the Season’s Most Colorful.” “Beat Beaumont” is the slogan which the Tigers are operating under this week. West End Park is in preparation for the traditional Orange-Beaumont football classic to be played.”

“The entire west side of Howell Stadium will be set aside for the Beaumont fans. By mutual consent of Orange and Beaumont school officials, the starting time of the game will be changed from 8:00 p.m. to 8:15 p.m. since the Beaumont fans cannot arrive in Orange until 7:30 p.m.

Halftime has been extended from 15 minutes to 20 minutes to give the Beaumont band and Royal Guards and the Orange Bengal Guards time to put on their full shows.

The Lutcher Stark Boys Band directed by Frank Hubert has relinquished its half time performance and will put on its drill before the game.

This will be the classic game of the year for local fans. The two teams are more evenly matched than usual, and it is surely to be the most colorful affair witnessed in Howell Stadium. The Beaumont Royal Guards, Royal Purple Drum and Bugle Corps and the Royal Purple Band will be in competition with the Orange High School Bengal Guards and the Lutcher Stark Boys Band.”

Thursday afternoon a group of Beaumont students was to go to Orange and assist with the pep rally to be held adjacent to Howell Stadium.

Friday morning a group of Orange students, including cheerleaders, Bengal Guards, and the band was going to Beaumont to assist the Purples with their pep rally.

The day of the game, the Beaumont football team, drum and bugle corps, and band and at least 1,000 students boarded a special Southern Pacific train. The train arrived at 7:30 p.m. at the train depot in Orange. From the depot, it was about a three-block walk to the stadium. 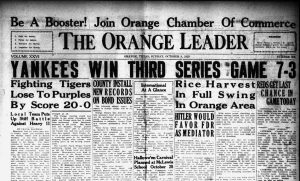 For 19 years, there had been a jinx on Orange in the annual ball game. Orange fans were excited and hopeful that this game would be the one that would end the 19-year jinx.

Howell Stadium had resembled a full bowl running over. Attendance at the game was estimated to be as high as 6,000. There had been a week of excitement and high hopes.

Excitement turned into disappointment for the Orange fans, the Tigers lost 20-0, it was reported in the Orange Leader, Sunday, October 8, 1939.