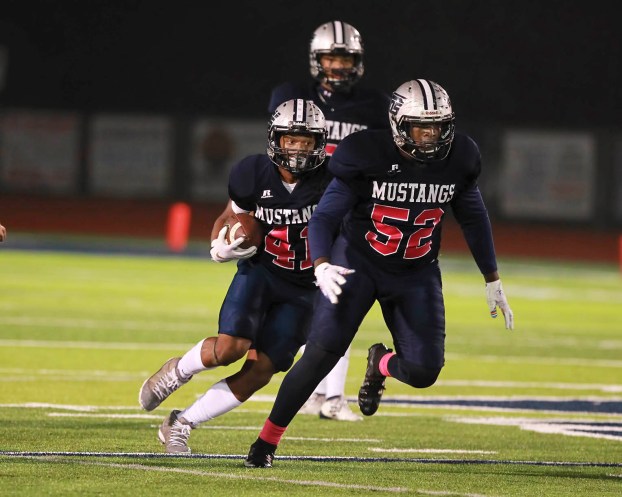 Mustang sophomore tailback Elijah Gales darted for 174 yards and five touchdowns on just 11 carries and WO-S held the Hawks to 146 total yards in a commanding 49-12 victory.

The Mustangs outganed the Hawks 400-146 on the night. Gales got some rest late as fellow Mustang back Terry Harris and JaQuailon Chaney teamed up for 108 yards on just eight carries.

The Hawks managed just 128 rushing yards on 43 tough carries and passed for 18 yards. Running back Sam Dickerson led the H-J attack with 44 yards on 11 carries.

The Mustangs led 28-12 at intermission despite committing three turnovers that led to all 12 Hawk points as Gales had three of the Mustang touchdowns in the half.

On the first series of the game the Mustangs got to the Hawk 46 but Terrell fumbled it and the Hawks returned it to the WO-S 42.

The Hawks found paydirt eight plays later. On fourth-and-four from the 26, Sam Dickerson broke loose down the right sideline for a 25-yard gain and on the next play quarterback Westen Nugent bolted in from a yard out. The extra-point failed as the Hawks led 6-0 with 7:15 in the first quarter.

The Mustangs countered with a six-play, 49-yard scoring drive. The key play was a 18-yard screen pass from Terrell to Gales that got to the H-J 9. Two plays later Gales bolted off left tackle for a two-yard touchdown. Angel Ibarra booted the extra-point to give the Mustangs a 7-6 edge with 4:10 in the first quarter.

The Hawks cashed in on another Mustang turnover late in the first quarter.

Mustang back Chaney fumbled the ball over to the Hawks at the Mustang 16 with 2:49 in the quarter. Five plays later it was Nugent scoring again, once again from a yard out. The Hawks went for the two-point conversion but failed and led 12-7 with 0:21 in the first quarter.

The Mustangs bounced right back with a seven-play, 70-yard drive to take the lead again.

Terrell connected with receiver Andre Thomas on a huge 35-yard connection that got down to the Hawk 3 on fourth-and-11 from the 38. Gales bolted up the middle for a three-yard touchdown on the next play as WO-S snagged a 14-12 edge with 9:20 in the half.

After a shank three-yard punt by the Hawks, WO-S set up shop at the H-J 31 and found paydirt three plays later. Gales broke loose for a 21-yard spring to the H-J 10 and Terrell scored on a nine-yard keeper up the middle two plays later to make it 21-12 with 5:54 in the half.

The Mustangs muffed a punt at their own 46 with 4:10 in the half but came away unscathed as the Chain Gang defense stuffed Nugent on a fourth-and-2 play at the WO-S 26 with 0:41 in the half.

Gales made the Hawks pay when he took a pitch along the left side and out sprinted the H-J secondary for a 66-yard touchdown gallop with 0:16 in the half, pushing it to 28-12.

Gales zipped for 133 yards on nine carries in the half while Terrell completed 4-of-7 passes for 60 yards.

The Hawks’ 89 yards all came on the ground on 26 carries with Dickerson leading the way with 30 yards on five totes.

Chaney increased the margin to 42-12 with 7:06 in the third when he had a 35-yard touchdown burst up the middle.

The Mustangs will head to Liberty next week to take on the Panthers. H-J has a bye next week and will play host to Liberty on Nov. 8.

LUMBERTON – The Lumberton Raiders were stingy on defense Friday night as they shut down the Bridge City Cardinals 29-0... read more