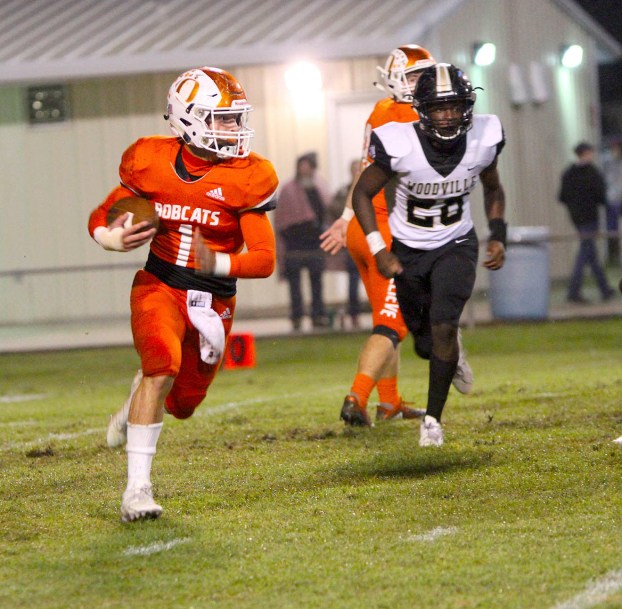 Tommy Mann, Jr./Orange Leader Orangefield running back Chase Broussard (1) turns the corner for one of his several big gains against Woodville Friday night.

Bobcats slam the door on Woodville, 31-0

ORANGEFIELD – The Orangefield Bobcats made a bold statement Friday night, taking care of the Woodville Eagles 31-0 in District 12-3A Division I action.

The weather wasn’t amazing, but Chase Broussard and the defense were for the Bobcats (7-1, 4-1).

Broussard would end the night with 182 rushing yards with four carries over 20 yards with a couple touchdowns to go with it.

His ability to break away after getting past the defensive front was a big reason for his burst-out game. Along with the defense, this was the perfect setup for a stomp from the Bobcats.

In the defensive battle, the Bobcats won that fight throughout the entirety of the game. The bBobcat defense shut out the Eagles (2-6, 1-4) offense, not allowing a single point or let them get really really. The ability to stop the offense on third and fourth downs was key for the Bobcats all night long, as well as a couple turnovers mixed in there. This was a defensive performance the Bobcats will want to repeat as often as they can.

A defensive battle opened up the game with either team trading field positions and trying to find success on the ground. The Bobcats would force a fumble during the first quarter and took over in Eagle territory, but weren’t able to take any points before they had to give the ball back to the Eagles. The first quarter would end tied at 0-0 as both teams looked for their offenses to find some room to run.

The Bobcats broke a big play to take the lead seconds before the first half ended. After stopping the Eagles again on defense, the Bobcats took over and had less than a minute to get down the field and score.

Broussard got the opening barrage of carries getting a couple first downs and crossing the 50. Thanks to good clock management, Heston Puckett would get the chance and find a hole up the middle and break away for a long 41-yard run. Puckett would just make it over the goal line, as he had to carry an Eagle defender along with him. The PAT wouldn’t go through, but the Bobcats would lead 6-0 heading into halftime. Puckett finished with 91 yards on 11 totes.

After turning the ball over, the Bobcats defense came up big with a safety. The Bobcats made a long drive that ended in a red zone interception, giving the Eagles the ball at their own 1. On the first play the Bobcats stuffed them in the backfield for the safety to extend their lead to 8-0 with eight minutes left in the third quarter.

Broussard broke another big run to extend the lead even further in the third quarter. On the sixth play of the drive, Broussard bounced it outside to the right and punched his way in through a defender and dove into the end zone for a 28-yard score. Broussard would convert the two-point conversion as well to make it 16-0 with 5:28 left in the third quarter.

Another big play from the Bobcats, this time being Hunter Ashworth, who made the play to break the game wide open. After a couple penalties by the Bobcats, on the second play of the drive Ashworth muscled his way through the defense to break away for a long 42-yard run for the touchdown. Gunner Jones would pass to Logan Gipson for the two-point conversion, giving the Bobcats a 24-0 lead with three minutes left in the third quarter. Ashworth had 83 yards on eight touches.

The Bobcats opened up the fourth quarter with even more points, as the flood gates had fully opened for their offense. Broussard and Ashworth would have a few more big plays, with a 45-yard run from Broussard and a 15-yard run from Ashworth. Those runs would setup the Jones QB run to the corner of the end zone to score. After the PAT the Bobcats lead 31-0 with nine minutes left to play.

The Bobcats would put a bow on this game, ending in the victory formation to secure another district win, after dropping just one so far this season. The defense and the run game showed their might for the Bobcats and they will hope to continue this second half performance into their future weeks.

The Bobcats finished with 430 total yards while limiting Woodville to a mere 112. The Bobcat defense bottled up Woodville’s Keon Chatman, the leading rusher in the district coming in, to 41 yards on 17 carries. Jaylon Hyder added 41 yards on 13 totes for the Eagles.

The Bobcats will hit the road to Warren next week to face the Warriors while the Eagles return home to host the Kirbyville Wildcats.