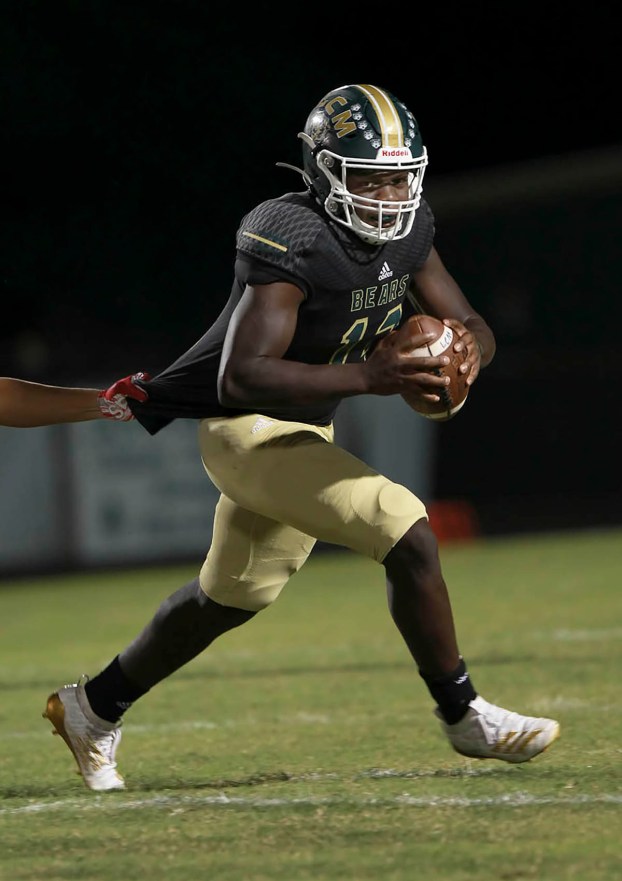 Bears put the hammer to Livingston

LITTLE CYPRESS – Despite the wet and cold conditions, the Little Cypress-Bears showed up to play football Friday night, while the Bear faithful packed the stands. Senior quarterback Ethan McCollum dazzled the on-looking with big run plays early and often. McCollum notched 223 yards rushing while tossing 146 yards in the 27-6 blowout win over the Livingston Lions.

The Bears won the coin toss and elected to kick the ball to the visiting Lions (2-5, 0-3), which proved to be a great move by the Bears. The first play from scrimmage Lion quarterback Christian Washington would be intercepted by defensive back DJ Williams. The interception gave the Bears the ball at their own 48.

LC-M would have better luck on their first play from scrimmage than the Lions. McCollum torched the Lions defense for a 52-yard touchdown while tiptoeing the sideline. The Bears led 6-0, following the missed extra point with 11:37 still left in the first quarter of play. McCollum ended the first half of play with 152 yards rushing and two scores.

Livingston seemed to get their offense moving on the second drive of the game after Debrian Rains would tote the ball three times and pick up the first Lions first down of the night. Unfortunately, the Lions offense would sputter, and they’d forced to punt back to the hot-handed Bears team.

Once again, it didn’t take long for McCollum to get his offense moving. On the third play of the drive McCollum launched into the secondary on a keeper play and spun his way out of tackles to speed down the middle of the field for a 42-yard touchdown. The touchdown catapulted the Bears out front, 13-0, with over seven minutes left in the first quarter.

The two teams swapped possessions the duration of the first quarter with both sides having their share of penalties’ and miscues that halted would-be scoring drives. McCollum got the passing game going hitting DJ Spears for 37 yards over the middle, but the drive would stall after penalties. The Lions got the offense into Bear territory with a fake punt on fourth –and-two ending the first quarter with a fresh set of downs just shy of the Bear 30.

The LC-M defense would “Bear-down” to halt the Lion offense, forcing a turnover-on-downs giving the Bears the ball at their own 19. The momentum was short lived, after using a combination of run and pass plays to push the ball into Lion territory, the Bears would fumble a toss play which handed the ball back to the Lions with good field position.

Once again, the LC-M defense stepped up and made big play. The defense pressured the quarterback into bad throws and one of those bad passes would be picked off by Carter Cates. The interception gave the Bears the ball near midfield. Both squads would not be able to move the ball the duration of the second quarter and the Lions tossed their third interception of the night with Williams again snagging the pass by Washington to end the half with the Bears leading 13-0 and receiving the ball to open the second half of play. The Bear offense posted over 250 yards in the first half.

LC-M didn’t take advantage of receiving the second half kick-off as they quickly went three-and-out punting the ball to Livingston with well over 10 minutes left in the third quarter. The Lions showed some offense early during their first possession of the second half, but after crossing midfield Keon Perkins fumbled the handoff and Eric Garcia recovered the fumble for the Bears at the Lions 48. Again, the Bears were unable to move the ball on offense and took a heavy 15-yard loss due to personal foul penalty.

The Bear offense finally got going with under five minutes left in the third quarter. McCollum used his legs to take advantage of a worn down Lion defense. Andy McDow got his first carries of the night on the drive, garnering 21 yards on three carries. McCollum polished off the drive for a 27-yard touchdown run – his third of the night – putting the Bears on top, 20-0, with under a minute left in the third quarter.

Livingston looked defeated as they took the ensuing possession, despite mustering 26 on the next three carries, Perkins would cough up the ball for the team’s fifth turnover. Eric Garcia would again recover the fumble for his second recovery of the night. The fumble gave the Bears the ball at their own 35.

The Bear offense took on a more conservative approach to open the fourth quarter to run down the clock. McCollum used his legs again to move close to midfield before hitting DJ Williams down the sideline for 32 yards. It would again be McCollum finishing the drive as he trotted around the right side for a 17-yard touchdown run that essentially put the game out of reach for the Lions as they trailed 27-0, with less than six minutes left in the game. Williams finished the night with three catches for 42 yards.

The Bear defense would go to some youth on defense as they finished out the game. The Lions took advantage and managed to put together a 55-yard drive with Debrian Rains notching a short five-yard touchdown run for the Lions’ only score of the night. The Lions trailed, 27-6, with the clock running at less than five minutes remaining in the ball game.

The Bear offense and defense were firing on all cylinders, Friday night, with the defense forcing five turnovers and holding the Lion offense to less than 200 yards. The Bear offense tallied 448 yards on the night.

Livingston will play host to Bridge City next week.