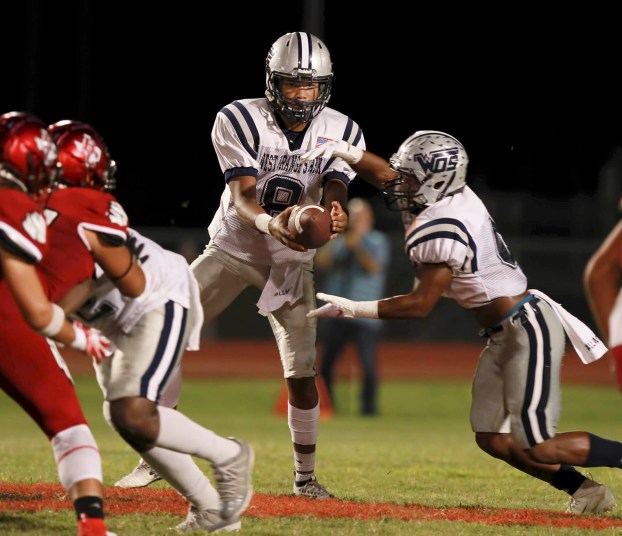 WEST ORANGE – There is no question about it, the West Orange-Stark Mustangs will be chomping at the bit come Friday night when they welcome in the Hardin-Jefferson Hawks to Hooks Stadium for Homecoming in a District 10-4A Division II encounter.

When the Mustangs (4-1, 1-0) see the winless Hawks (0-7, 0-2) across the line of scrimmage it will be just the third time in 36 days that the Mustangs have seen someone else in a different colored uniform.

The Mustangs did not play against Crosby due to Tropical Storm Imelda. They could not face the Jasper Bulldogs in their last non-district game due to major lightning and then they had their bye week last week.

The Hawks are still in search of their first victory of the season. H-J has battled hard pretty much all season long and have absorbed some tight losses.

The Mustang defense, allowing just 213.6 yards a game, 133 on the ground and 80.6 in the air, will be concentrating on stopping the Hawks’ Slot-T offense, which has put up a solid 26.4 points a game.

The Mustangs will look to continue to make strides with their spread offense behind junior quarterback Jerren Terrell.

Terrell has completed 54-of-89 passes for 641 yards and four touchdowns and has rushed for 86 yards and two scores.

Sophomore back Elijah Gales powers the Mustang ground arsenal with 603 yards and eight TDs on 80 carries. Fellow sophomore back Ja Quailon Chaney has shown sparks in the last two games and has zipped for 120 yards and two scores on 21 totes.

The Mustangs will venture to Liberty next week to face the Panthers. H-J has a bye next week and will return home Nov. 8 at home against Liberty.

Bears to welcome Lions for Homecoming

LITTLE CYPRESS – With just three games remaining, the Little Cypress-Mauriceville Battlin’ Bears are on a quest to try to... read more