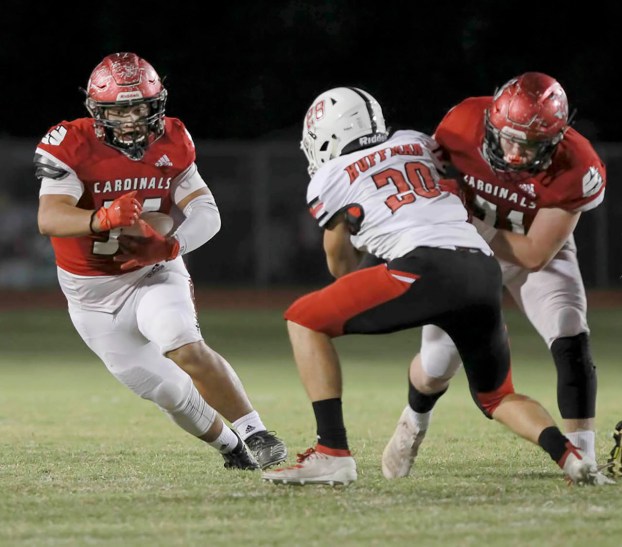 BRIDGE CITY – The Bridge City Cardinals will look to snag their first District 11-4A Division I victory of the season Friday night when they make the trek to Lumberton to take on the Raiders.

The young Cardinals have played hard in their 11-4A losses to both LC-M and Huffman but have hurt themselves with turnovers and allowing a few big plays on defense.

The Cardinals allowed two defensive touchdowns in the early going against Huffman last week but they continued to battle hard throughout the night.

Sophomore quarterback Ethan Oceguera had his best passing game of the year against Huffman as he threw for 222 yards and a pair of touchdowns. He also led the Cardinal ground game with 47 yards.

Cardinal receiver Jackson Tims snagged five of Oceguera’s tosses for 112 yards and both scores, including a superb 64-yard strike in which he eluded several Huffman defensive backs on his way to the end zone. Colby Collins also had three catches for 79 yards.

The Cardinals will also look for a balanced ground game against the Raiders with tailback Rylan Ply and fullback Andy Lara.

The Raiders are stout along the defensive front, sparked by All-District defensive tackles Waylon Drake and Champ Roach.

The Raiders will check-in with a strong Slot-T offense and a plethora of backs to get the ball to.

Quarterback Drake Boykin spearheads the offense. The Raiders have three tailbacks and halfbacks that Boykin gets the ball to, including Clay Jenkins, Blaine LeBlanc and David Barthol along with fullbacks Adam Sellers and Skylar Hussey.

The Cardinals will certainly be stacking the line of scrimmage in trying to slow down the rushing attack of the Raiders. If the Raiders do throw it, it will be against a much-improved Cardinal secondary that had a solid game against Huffman last week.

The Raiders went into Bridge City last year and knocked off the Cardinals 34-0 as they had 310 yards, all of it coming off the ground game.

The Cardinals will venture to Livingston next week to face the Lions while the Raiders hit the road by going to Splendora to face the Wildcats.

HAMSHIRE – The Little Cypress-Mauriceville Lady Bears nailed down the second-place berth out of District 22-4A Tuesday night by going... read more