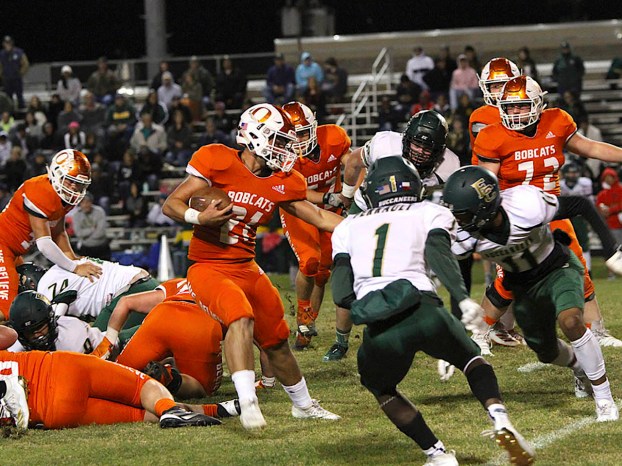 Bobcats set to tangle with Eagles

ORANGEFIELD – There is no doubt that the Orangefield Bobcats are on a mission as they will look to continue their winning ways Friday night when they welcome in the Woodville Eagles in a District 12-3A Division I clash.

The Bobcats (6-1, 3-1) are coming off a huge defensive game last week after they went on the road a dropped the Hardin Hornets 21-6.

Meanwhile, the defending 12-3A champion Eagles (2-5, 1-3) have hit a rough patch at times this season, especially with a young defensive unit. The Eagles have moved the ball well at times but have allowed 216 points on the defensive side.

The Eagle defense will try to slow down a strong Orangefield running attack. The Bobcats will check in averaging 293.6 yards a game, 276.7 of it on the ground.

It’s been hard for opposing defenses to key on any Orangefield back, as they all run behind a strong Bobcat offensive front.

Gunner Jones delegates the ball to everyone at quarterback.

Heston Puckett leads the balanced ground arsenal with 366 yards and three TDs on 68 carries. Chase Broussard has 351 yards and five TDs on 42 totes.

Hunter Ashworth, Clayson Choate and Kent Michael also see valuable touches as well as the Bobcats tend to motor down the field with a nice, fluid pace.

Orangefield will face a Woodville defense that is allowing 347.9 yards a game.

The Bobcat defense, which has allowed just 198.1 yards a game, will certainly be honed in on Woodville tailback Keon Chapman, 12-3A’s leading rusher. Chapman has zipped for 835 yards and seven touchdowns on 126 carries and has seven catches for 103 yards as Woodville averages 338 yards a game, 278.4 on the ground.

Woodville quarterback Kaden Young has completed 26-of-55 passes for 389 yards and three TDs with five picks.

The Bobcats will be seeking some revenge as well Friday after they went to Woodville and fell to the Eagles 43-14 a season ago.

The Bobcats will hit the road to Warren next week to face the Warriors while the Eagles return home to host the Kirbyville Wildcats.

BRIDGE CITY – The Bridge City Cardinals will look to snag their first District 11-4A Division I victory of the... read more