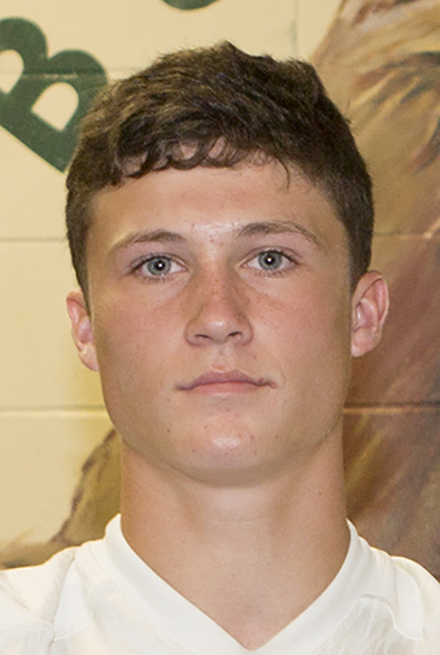 SPLENDORA – The Little Cypress-Mauriceville Bears took down the Splendora Wildcats 34-27 at Wildcat Stadium as they improved to 2-0 in District 11-4A Division I play.

It was the Ethan McCollum show for the Bears, as most of the offense went through the senior quarterback.

The Bears (4-2, 2-0) were able to take over early, thanks to their defense creating multiple turnovers on downs and interceptions to let the Bears take a nice big lead early.

Their offense was able to take advantage with McCollum through the air and on the ground. McCollum would pass for 138 and would run for 83 on the ground. The Bears total offense would be just 56 yards higher than McCollum’s total for the game as the Bears finished with 276 total yards.

After a tipped pass was intercepted by the Bears Carson Peet for a 51-yard return , it set them up in the red zone on the first drive.

McCollum and the Bears offense got an easy start thanks to their defensive turnover and they capitalized with a touchdown. Landon Bearden and McCollum would combine to run tt in from the 19 yard line after four plays ended with a McCollum run up the middle for the score. After the PAT the Bears took an early 7-0 lead with seven minutes left in the first quarter.

The Wildcats (4-2, 1-1) answered with a strong offensive drive after the turnover last drive. Andrew Hernandez would take over the drive with two first downs on five runs with two going over 10 yards. Wildcat quarterback Cody Thorndyke would redeem himself with a great pass to Jagger Kennedy for the touchdown to cap off the drive. After the PAT the game was tied at seven with four minutes left in the first quarter.

The Bears took back the lead in the second quarter thanks to McCollum’s arm and legs this time. McCollum would connect with DJ Williams for a long 31-yard pass on the second play of the drive, putting them in the red zone. McCollum would run it in, dragging a defender from 17 yards out for the touchdown. After the PAT the Bears lad 14-7 with eight minutes left in the first half.

Defense showed up big for the Bears with another interception, this time from DJ Williams, who ran for 60 yards to dive into the pylon for the touchdown. Williams’ receiving skills came in handy to give the Bears a two-score lead. After the PAT was blocked the Bears led 20-7 with 5:50 left in the first half. Williams also finished with eight receptions for 91 yards.

LC-M got the ball first in the second half and took full advantage, with another touchdown from McCollum on the ground. Bearden set up the drive-ending run with a few solid runs for a couple first downs. At the 37 McCollum got a high snap and bobbled it, almost losing possession, but was able to regain control and actually found a hole to run for the touchdown after the broken play. The PAT didn’t go through making the score 26-7 with 9:40 in the third quarter left.

Bearden finished with 52 yards on the ground.

McCollum had another great pass in the end zone to extend the lead even more. McCollum would break a big run to get the drive going and get within the red zone. Dropping back, McCollum would find Brendon Pollock in the end zone, throwing a pass only he could get to, for the 19-yard score. After the two-point conversion the Bears took a 34-7 lead with less than five left in the third quarter.

The Wildcats took advantage of a Bears fumble inside their own 10 and scored. After a bobbled snap Daniel Orr for the Wildcats scooped and scored from nine yards out. After the PAT the Bears still lad 34-14 with 1:40 left in third quarter.

The Wildcats shrunk the lead with another solid offensive drive, that consisted mostly of passes down the field. Thorndyke started to really let it loose this drive, with every play being at least a 10-yard pass attempt. His main target was Jagger Kennedy, going to him on a 29-yard touchdown pass. After the PAT the Bears lead was 34-21 with just under seven minutes left to play.

Thorndyke would find one last touchdown with a nice pass to Kennedy but would fail to convert on the two-point conversion. The Bears led 34-27 as the clock wound down in the game.

Thorndyke passed for 177 yards. Kennedy had nine catches for 144 yards.

The Wildcats would threatened a comeback late into the game, but never getting within two scores. Their offense started to find its footing with the pass game, but too little too late.

By Ronnie Hughes The Orange Leader   HARDIN- The Orangefield Bobcats were on a warpath Friday night, as they sought... read more