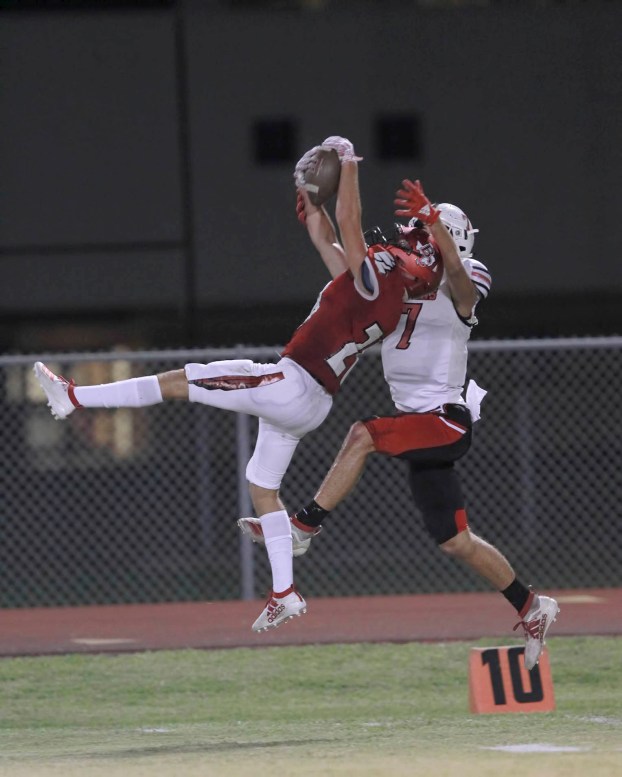 San Miguel powered the undefeated Falcons (7-0, 2-0) with a huge night as he rushed for 250 yards and three touchdowns on 16 carries and did not play anymore after the Falcons built a 35-7 lead over the Cardinals (1-5, 0-2) midway through the third quarter.

Oceguera, despite being under heavy pressure most of the night, completed 11-of-32 passes for 222 yards and a pair of touchdown passes to receiver Jackson Tims. Tims hauled in five receptions for 112 yards.

The Cardinal secondary played well, limiting standout senior Huffman quarterback Justin Shively to just 6-of-17 passing and two interceptions and just 43 yards. However, it was the San Miguel “show” and the Huffman offensive front that bewildered the Cardinals.

Huffman outgained the Cardinals 391-349 on the night. Huffman tailback Justin

Oceguera led the Cardinal ground game with 47 yards on 20 carries. BC receiver Colby Collins hauled in three passes for 79 yards.

Huffman utilized two defensive touchdowns and the legs of San Miguel to take a 28-7 lead by halftime.

San Miguel had 179 yards and two touchdowns on 12 carries in the first 24 minutes.

The Falcons struck early when the Cardinals coughed it up on their first series.

Oceguera got hit and fumbled at the Cardinal 30 and Falcon defensive end Gavin Bragg scooped it up and went 30 yards for the score. The Falcons missed the point-after kick but led 6-0 with 8:59 in the first quarter.

The Falcons cashed in on another quick Cardinal turnover when on the next Bridge City series, Huffman defensive end Chase Padgett picked off a Oceguera pass and took it 31 yards for a touchdown.

Jackson Landry booted the extra-point, making it 13-0 with 8:49 in the first quarter.

The Falcons scored the first time they had the ball on offense, going 64 yards in three plays. San Miguel capped it when he bolted off the left side and went 45 yards for a touchdown, pushing the lead to 20-0 with 5:49 in the first quarter.

Bridge City stymied a Falcons’ drive with 5:31 in the half when Rylan Ply picked off a Shively pass at the Cardinal 10.

The Cardinals grabbed another Falcon turnover when San Miguel coughed it up to Cardinal linebacker Dorian Pruett at the Falcon 44 with 3:44 in the half.

This time, the Cardinals produced points as they marched 44 yards in six plays. The big play came when Oceguera launched a deep pass and Colby Collins made a superb 32-yard catch along the left sideline to set up shop at the Falcon 17. Four plays later fullback Andy Lara plowed his way up the middle for a six-yard scoring blast.

Oscar Carranza booted the extra-point as the Cardinals trailed 20-7 with 2:11 in the half.

The Falcons closed the half with a seven-play, 76-yard march behind the legs of San Miguel. San Miguel carried four times for 55 yards on the march and Shively capped it when he hit receiver Noah Zamora with a 10-yard touchdown strike down the right sideline. Shively found Justin Fields for the two-point conversion pass to give the Falcons a 28-7 edge with 0:36 in the half.

The Falcons outgained the Cardinals 225-144 in the first half.

Oceguera completed 4-of-14 passes for 77 yards with Collins catching two of them for 53 yards. Oceguera had 34 yards on 11 carries while Ply had 20 yards on six totes.

The Falcons marched 76 yards on six plays to score on the first series of the second half thanks to the legs of San Miguel. He carried four times for 71 yards on the march. He had a big gallop of 30 on the first play and bookended it with a 33-yard touchdown dash up the middle to give the Falcons a 35-7 lead with 10:27 in the third quarter.

The Cardinals responded quickly when Oceguera threw a beautiful pass to Tims, who made a few excellent moves on the run against the Huffman secondary for a 64-yard scoring toss to trim it to 35-14 with 2:22 in the third.

The Falcons grabbed a safety when Oceguera was called for intentional grounding from the end zone with 11:44 remaining.

Huffman backup quarterback Luke Thomas hit receiver Justin Fields on a 40-yard scoring strike down the left sideline to make it 44-14 with 2:56 remaining.

The Cardinals showed plenty of grit though, going on a nine-play, 58-yard scoring drive at the end of the game with Tims catching three passes for 31 yards, including a four-yard touchdown dart from Oceguera with 0:11 remaining.

Next week the Cardinals will travel to Lumberton to face the Raiders while the Falcons return home to welcome in the Splendora Wildcats.