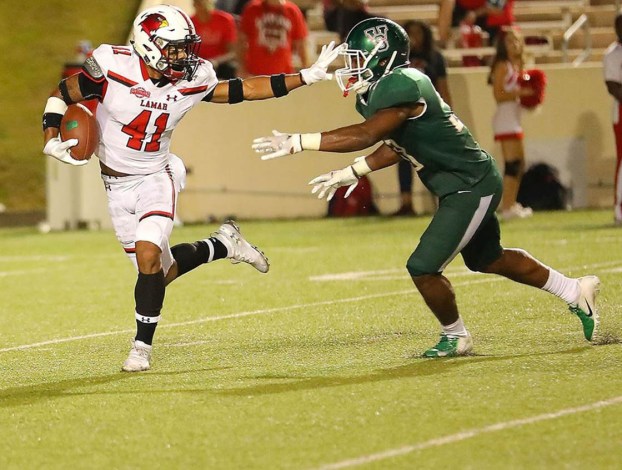 BEAUMONT, Texas – Lamar University heads to San Antonio with momentum clearly on its side. After three consecutive setbacks, the Cardinals are suddenly one of the hottest teams in the Southland Conference race after picking up consecutive wins over Abilene Christian and on the road last week at nationally ranked Sam Houston State. The Cardinals (4-3/2-2 SLC) have surged in the standings during that stretch rising from last in the league race into a tie for fifth – just a game back of Central Arkansas in the loss column.

Unfortunately for the Cardinals, things don’t get any easier as they hit the road to face defending Southland Conference co-champion, Incarnate Word. Also known as the Cardinals, San Antonio’s redbirds are fighting for their second straight league title. Just passed the midway point of the season, UIW is 4-2 (.667) overall and tied for second in the league with a 3-1 (.750) mark.

UIW is also riding the momentum wave heading into Saturday’s contest. The bad guys have won three straight, a list of victories that includes Abilene Christian to go along with road wins at Houston Baptist and Southeastern Louisiana.

Offensively, the two schools appear almost even in terms of the stats. UIW is ranked just ahead of Big Red in terms of scoring, total, rushing and passing offense. Where LU has the advantage is on the defensive side of the ball. The Cards are second in the Southland in terms of total defense, and lead the league surrendering just 209.4 yards passing yards per game. Part of the reason for the Cardinals success on the defensive side of the ball has been the rise of transfer Michael Lawson. The California native leads the team with 43 tackles and leads the conference with four interceptions.

Lawson, and company, will have to limit the production of UIW quarterback, Jon Copeland. Just a sophomore, Copeland is one of the top young quarterbacks in the country. He has completed nearly 60 percent of his passes this season for 1,441 yards and 11 touchdowns.

“This is a very talented team that we are facing this week,” said LU head coach Mike Schultz. “Eric Morris has done a tremendous job in a short period of time of building that program. He always has his guys well prepared, and we have to match that. In addition to that, UIW has some great talent on their team. Jon Copeland is one of the top young quarterbacks and he has so many weapons to choose from. Defensively, they have so many ways to hurt you. We have our work cut out for us.”

Historically, Big Red holds the series lead over UIW (4-2/.667) but last year’s victory in Beaumont ended a two-game slide to the other Cardinals. Big Red is 1-1 all-time in San Antonio with the lone loss coming during the 2017 season.

Saturday’s game will kick off at 4 p.m. from Gayle and Tom Benson Stadium and will be the second-straight afternoon kick following a stretch of six consecutive evening games. The game can be heard live on Newstalk 560 and will be televised on ESPN3.

VIDOR – It was a banner day for the Bridge City Lady Cardinals Thursday morning as they captured the District... read more