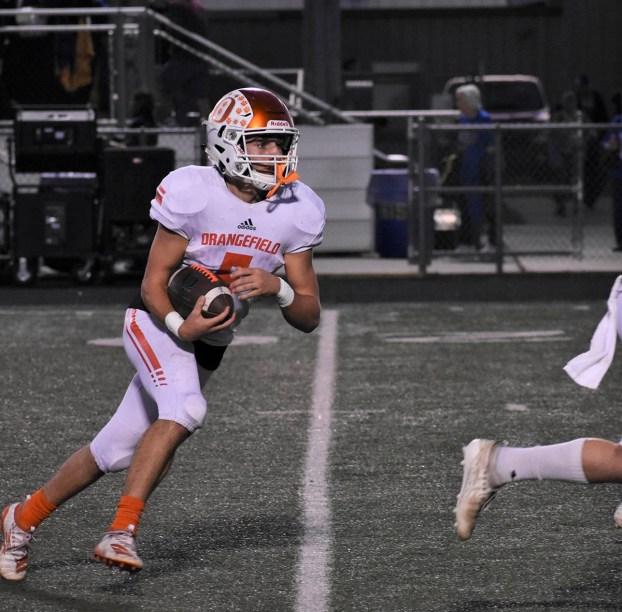 HARDIN- The Orangefield Bobcats were on a warpath Friday night, as they sought revenge after losing at home in 2018 to the Hardin Hornets.

The Bobcat offense was firing all night in the 21-6 win over the Hornets in an important 12-3A Division I matchup.

The Bobcat offense put up 243 yards using a bevy of back with Chase Broussard leading the charge with 81 yards on the ground.

Orangefield found itself in trouble following an 8-yard loss that forced them into an important fourth down situation. The Cats’, however, uncharacteristically tossed the ball over Hornet defenders picking up the first down inside the red zone. Kent Michael capped the drive with a 10-yard touchdown run putting the Cats’ ahead, 7-0, following the extra point with just over five minutes remaining in the first quarter. Michael finished the night with 39 yards to go along with his one score.

Hardin struggled to move the ball throughout the first quarter, mustering just under 20 yards of offense against a stout Bobcat defensive front. The Bobcats took full advantage draining over seven minutes off the clock to open the second quarter. The Bobcats took the 55-yard, 12-play drive down the field with Chase Broussard trotting in from 11 yards out to push the Cats’ further ahead, 14-0, with 5:53 remaining in the second quarter of play.

The Hornet offense finally caught a break on the ensuing possession. Austin Potetz and Trenton Dickey ripped off big runs to advance the ball well into Orangefield territory. Potetz then found Liam Beausoleil for a 25-yard pass, putting the Hornets in scoring position with under a minute left in the first half of play. Following a big fourth down conversion that put the Hornets at the Bobcat 10, Potetz, would be intercepted in the end zone by Chase Broussard. The Bobcats would kneel the ball to end the half leading 14-0, over a struggling Hornets team.

Offensive struggles continued into the second half for Hardin. The second play of the half Potetz again would be intercepted, Kent Michael snagged the interception for the Bobcats.

The two squads struggled much of the third quarter until the Hornets shocked the Bobcat defense. Following several possessions where the Bobcat offense went cold the Hornets caught a break. Potetz would find Beausoleil over the middle for a 79-yard touchdown pass after several plays drawing the safeties in. The Bobcats clung to a 14-6 edge at the end of the third quarter. Potetz finished the night with 117 yards passing and three interceptions on 4 of 15 passing.

Potetz started the fourth quarter like he opened the third quarter. Clayson Choate toed the sideline to intercept the pass and hand the ball back to the Bobcats. The Cats’ were plagued by penalties and their drive was stalled forcing them to punt back to the Hornets.

The Hornets were unable to catch a break as the Bobcats pinned them at their own nine yard line. After a quick three-and-out, Hardi, would punt out of their own end zone. A Bobcat defender was able to tip the ball and give Orangefield the ball at the Hardin 11.

Hunter Ashworth iced the game for the Bobcats with an 11-yard touchdown run while carrying a host of Hornet defenders on his back. The Cats’ led, 21-6, with under five remaining in the game and would run out the clock on their next possession. Orangefield held the Hornets ground game to just 20 yards rushing on 25 carries.

Orangefield will host Woodville next week while looking to remain in the playoff hunt. Hardin will regroup and travel to Anahuac in hopes of finding some offensive production.

Next week the Bobcats return home to face the Woodville Eagles while the Hornets will head to Anahuac to take on the Panthers.