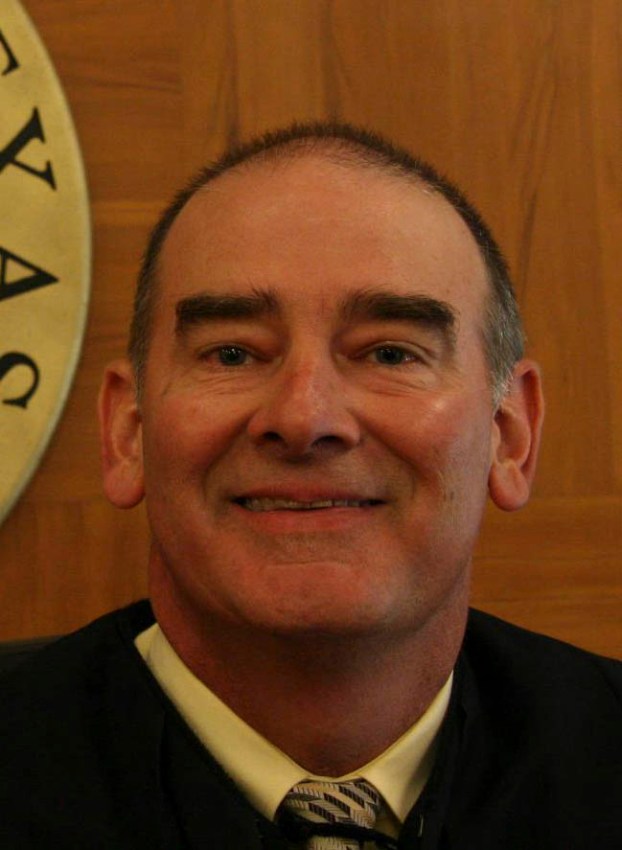 Judge Troy Johnson, at the October meeting of the Orange County Bar Association, announced that he is seeking a fifth term as Judge of the County Court at Law No. 2. He issued the following statement:
“Back in 2004, you entrusted me with the future of a brand-new court—the County Court at Law No. 2. I promised that I would eliminate the large backlog of criminal cases, that I would work hard, and that I would be fair and respectful to all who came before the court. Fifteen years later, much has changed but what hasn’t changed is my strong work ethic and my positive attitude that I bring to the bench each day. It’s as simple as this—I love my job, I don’t take my responsibilities as a public servant for granted, and I very much enjoy coming to work each day.

Stepping up on that bench each morning is something I look forward to because of the unique challenges of dealing with all of the different criminal, juvenile, civil, divorce, and child custody cases that the court handles. I also look forward to coming to work because of the great people that I work with and interact with each day. From my great staff—Juanita (court coordinator), Kim (court reporter), and Eddie (bailiff)–all the way to the custodial crew, I can’t say enough good things about the people who work alongside me in this building serving the citizens of Orange County.

I stress that I love my job because it brings me to my next point. You’ve always heard the saying that “happy employees make for productive employees.” Well, the same goes for judges. I am happy. Juanita, Kim, and Eddie tell me that they are happy. The result of all of this happiness is a court that operates smoothly and efficiently. The County Court at Law No. 2 is a productive court and all of that productivity means that I have been able to keep the promises that I made back in 2004.

The promise around which my campaign revolved was the one I mentioned at the beginning of this statement–my promise to eliminate the large backlog. When I took the bench on my first day, the backlog consisted of 6,727 criminal cases. Fast forward through September 2019 and that backlog has been reduced by 64%. In addition to the backlogged cases, the court took on an average of more than 1,000 NEW criminal cases each and every year. To accomplish that 64% reduction, the court has disposed of more than 17,000 criminal cases since its inception. I mentioned earlier that the court handles more than criminal cases and those cases have been efficiently managed as well. The court has disposed of 1,253 domestic (divorce and child custody) cases, 925 civil cases, and 495 juvenile matters. We have been busy.

Fifteen years and almost 20,000 disposed of cases can be summed up in one word–EXPERIENCE. I spent 16 ½ years practicing in courtrooms, but experience ON the bench is not the same as experience in the courtroom IN FRONT OF the bench. I have experience on the bench and plenty of it. Why does experience matter? Let me explain. Thankfully, most folks will never have any interaction with a court beyond serving on a jury from time to time. If, however, your child was accused of a crime, detained, and brought to a juvenile court; there could be disastrous consequences. Your child’s future is now at stake and your child could be forever adversely affected by the outcome of the case. The example could just as easily apply to a divorce case, a child custody case, or a car wreck case. In situations such as these, EXPERIENCE MATTERS! You will certainly want a good attorney, but the final outcome will be decided by the judge. You will want a judge with a reputation for fairness. You will also want a judge with experience and plenty of it. Experience and fairness is what you will continue to get if you keep me on as Judge of the County Court at Law No. 2. I will continue to keep the promises I made fifteen years ago.

Finally, a little about me and my family. I was born in Orange Memorial Hospital and grew up in West Orange. I graduated from West Orange-Stark High School in 1979 with 394 great classmates and continued to live at home until I graduated from Lamar University. I mowed yards while I was in high school and worked at Kroger and then Kmart while I attended classes at Lamar University. I attended law school at the University of Houston and when I came home for a wedding in 1986, I met Veronica McNeil from Orangefield and fell in love. We have now been married for 31 years and have two children. They are both graduates of Orangefield High School where Veronica taught for 25 years. Our daughter, Valen, graduated from McNeese State University and our son, Luke, graduated from Lamar University. Both were recently married. Valen is 28 and lives in Tennessee with her husband, Griffin. Luke is 25 and has settled in Florida with his wife, Haley. Veronica retired in June after 28 years in the classroom.
Please visit my Facebook campaign page at facebook.com/keepjudgejohnson.

The National Hurricane Center is continuing to monitor an area of low pressure over the Bay of Campeche and southern... read more