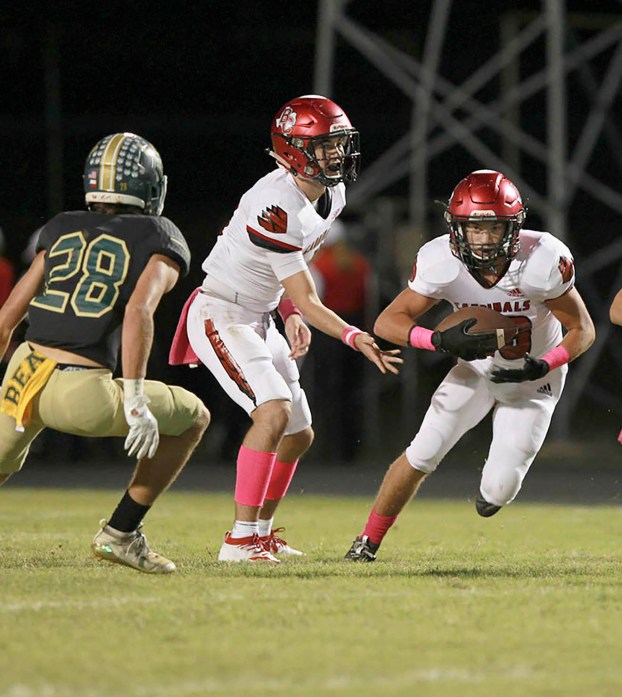 BRIDGE CITY – After battling Little Cypress-Mauriceville hard in their District 11-4A Division I opener last Friday before falling short 26-14, the Bridge City Cardinals turn there focus this week on the last undefeated team in the district – the Huffman Falcons.

The Falcons (6-0, 1-0) certainly entered the campaign with high expectations as they returned 15 starters from last season’s 6-6 playoff unit, nine on offense and six on defense.

Huffman has certainly got a pair of standouts on offense in quarterback Justin Shively and running back AJ San Miguel, but there defense has been the biggest surprise thus far.

The Falcons have outscored their opponents 253-82 for the season and started off their 11-4A campaign last week with a big 35-18 home win over the Lumberton Raiders. They are seeking their 11th playoff appearance in 12 seasons.

The Huffman offense has been more explosive this year after a great season a year ago. Shively, a three-year starter and all-district pick, is on pace to topple last season’s passing totals in which he tossed for 2,229 yards and 26 TDs.

He has the luxury of getting the leather to two all-district receivers in the forms of Peyton Pierson and Noah Zamora.

Throw kin San Miguel and the Falcons certainly have their options in their spread offense. San Miguel zipped for 1,645 yards and 10 TDs a season ago and is on pace to have those numbers again.

Bridge City moved the ball well against LC-M in the first half last week before slowing down in the second half.

Bridge City sophomore quarterback Ethan Oceguera has shown plenty signs of a promising future. He had 67 yards rushing on 11 carries against the Bears. He had a 150-yard performance in the Cardinals’ 35-21 win against Anahuac earlier in the season.

The Cardinals also saw the return of running back Rylan Ply against the Bears after he missed some games with an injury. Ply rumbled for 69 yards on 12 carries against the Bears. Bridge City would also like to get senior fullback Andy Lara, who has played so well on defense too, going against the Falcons.

The Cardinal defense allowed 355 total yards against the Bears last week as they will look to slow down the explosive Falcons Friday.

Jackson Tims had a superb game for the Cardinals against the Bears along with fellow linebackers Dorian Pruitt and Garrett Ashworth.

The Cardinals fell to the Falcons 41-16 on the road last season.

Next week the Cardinals will travel to Lumberton to face the Raiders while the Falcons return home to welcome in the Splendora Wildcats.

LITTLE CYPRESS – Looking to fine-tune as they look ahead to the playoffs, the Little Cypress-Mauriceville Lady Bears downed... read more