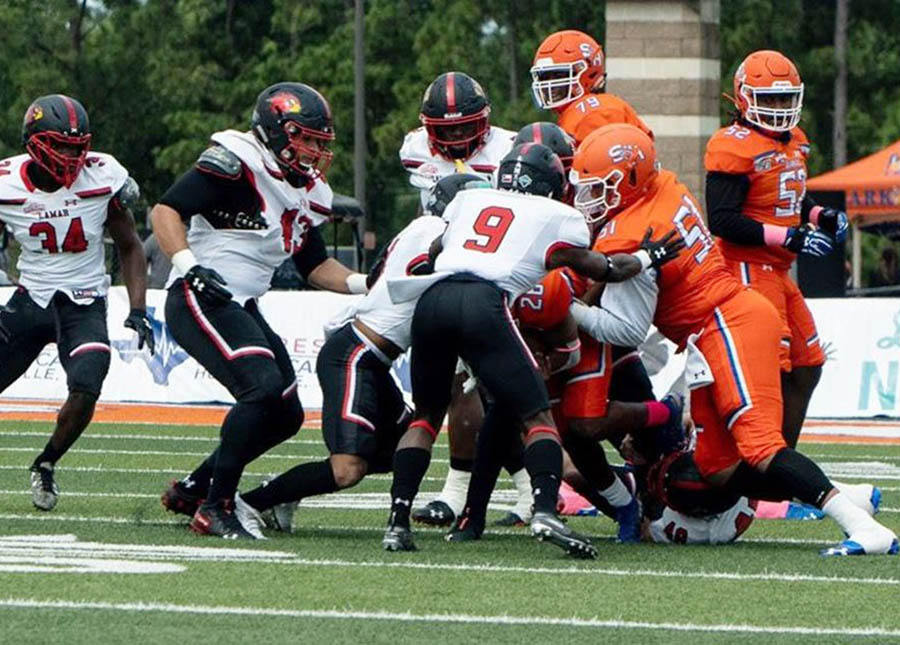 HUNTSVILLE, Texas – For a second-straight year, Lamar University stepped on the field to face a nationally ranked Sam Houston State squad, and for the second consecutive year the Cardinals stun SHSU posting a 20-17 triple overtime victory in Huntsville. The victory – LU’s second in a row – pushes the Red and White back over .500 on the season (4-3/2-2 Southland).

Senior Jordan Hoy completed 24 passes for 212 yards and one touchdown.

“I’m so proud of this team, because they never stopped fighting,” said LU head coach Mike Schultz. “It’s easy to get down on yourself when things aren’t going your way but our guys never quit. They remained positive kept saying on the sideline ‘we’re still in this, keep fighting.’ I can’t say enough about their effort.”

It took nearly a full quarter for either team to dent the scoreboard and the homestanding Bearkats took the first lead of the game. SHSU’s Ty Brock hit Nathan Stewart from five yards out on a drive that was aided by a pass interference and a targeting penalty – a call which forced Kevin O’Neill out of the game.

The Cardinals’ defense got the equalizer early in the second quarter following a Sam Houston conversion on third down. As the Bearkats came to the line, the SHSU quarterback looked to the sideline at the same moment the center snapped the ball. LU’s defense reacted immediately as Cameron Houston recovered the ball in the back of the end zone.

The Cards dodged a major bullet right before the half. After forcing a punt, the Cardinals took over from their own 11-yard line but fumbled the ball back to Sam on the first play. Big Red’s defense didn’t give any ground and forced a 22-yard field goal which was hooked to the left. Big Red had just enough time to move the ball into SHSU territory to set up for a 54-yard attempt. Junior Bailey Giffen’s attempt had the distance but was pushed just to the right of the upright.

The defensive battle saw both teams head into the locker room all tied at seven. The two teams finished the opening half with a total 180 yards of total offense. The Cardinals’ D overwhelmed their hosts allowing just 68 yards, including 29 through the air.

The score remained unchanged through the third quarter as neither defense was willing to give ground. The Cardinals had a chance to put the first points up in the second half after moving the ball down to the Sam Houston 21 – following a good punt return from junior Michael Lawson. Giffen was called on to attempt a 38 yarder but the kick was pushed wide right.

The Bearkats appeared to be on the march on the ensuing possession but Lawson picked off picked off a Ty Brock pass deep in Cardinal territory to thwart the drive but the Cardinals were unable to convert and were forced to punt the ball back to SHSU. That would be the last opportunity for either team in regulation as the game ended the way it started.

The Cardinals finished regulation with 197 yards to total offense, while SHSU had just 208 (84 passing). The Bearkats won the coin toss and elected to go on defense. The Cards appeared to score first with a touchdown pass in the back of the end zone to Kenny Allen but the score was wiped off the board due to a holding call. The Cardinals again turned to Giffen from 43 yards out and he drilled the kick between the uprights. After an 18-yard reception on the first play for Sam Houston, LU’s defense held forcing the Bearkats to settle for a field goal and a second overtime.

In the third overtime, the Cardinals got the ball first and got another field goal from Giffen (27 yards), turning it back over to the defense. LU put the Bearkats in third and long and Lawson stepped up to record his second interception to lock up the victory.

LU returns to action Saturday when they travel to San Antonio to take on UIW. The game against the Southland’s other Cardinals will kick off at 4 p.m. at Benson Stadium.