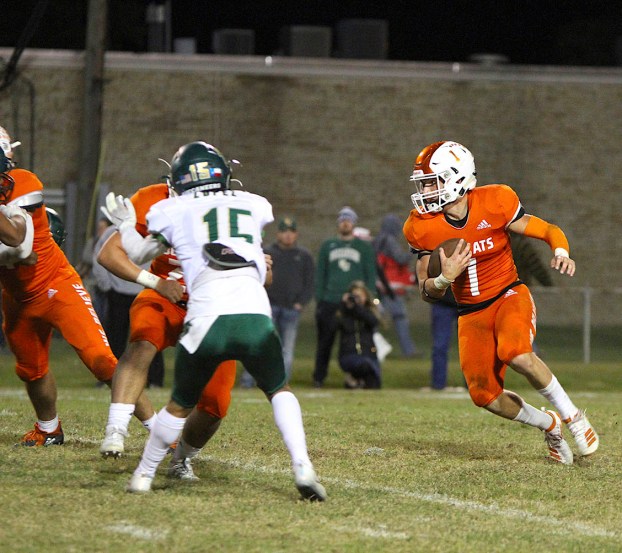 Buccaneers fight off Bobcats in hard-fought 12-3A battle

ORANGEFIELD – The East Chambers Buccaneers escaped the Orangefield Bobcats 28-23 in what was a terrific District 12-3A Division I battle between two of the, arguably, best teams in the district.

The Buccaneers (5-1, 3-0) biggest advantage this game was their speed outside on offense. They have multiple backs and a quarterback who can break the edge on any play and did that often this Friday night.

The Bobcats (5-1, -2-1) would find a few ways to slow them down with various blitz packages, but ultimately Nolton Shelvin and Ernest Ceasar had their way with the Bobcat defense. The two combined for 179 yards on 27 carries.

The Bobcat offense took a little bit to get going, like last week, but this time wouldn’t be able to rally in the second half to win. To their credit they were able to get within striking distance of taking the game in the fourth quarter by showing heart and true grit. The Buccaneer defense found just enough left in them late in the game to hold off the Bobcats.

The Bobcats opened up with a long drive from their own 30 to get the game’s first points. After a barrage of runs from multiple backs, the Bobcats muscled their way down the field with four first downs. The biggest advantage gained during this drive was the eight minutes they killed on the clock. The drive ended with an 18-yard field goal from Gunner Jones to take an early 3-0 lead with just over four minutes left in the first quarter.

The Buccaneers answered with a huge play from Nolton Shelvin. After losing five on the first play, Shelvin found the outside for the Buccaneers and wouldn’t be touched all the way to the end zone for a 64-yard touchdown run. After the PAT went in the Buccaneers were up 7-3 with just over three minutes left in the fist quarter.

The Bobcats had another long drive on the ground, but this time were able to convert it into six points. Chase Broussard took most of the carries on the march to bring them within the two-yard line, Hunter Ashworth would punch it in with a hard two-yard run for the touchdown to cap off the drive. The Bobcats would not make the two point conversion but did lead 9-7 with just over nine minutes left in the first half.

East Chambers took the lead back with a strong drive ending in a touchdown just before halftime. Shelvin and Ernest Ceasar would take over the drive on the ground, getting first downs left and right to get down the field quick. Shelvin would cap off the drive with an eight-yard touchdown run around the outside. After the PAT went through the Buccaneers led 14-9 with 1:48 left in the first half.

Ceasar punched in another touchdown for the Buccaneers to pad their lead to open up the second half. On the first drive of the half, the Buccaneers drove it down the field on the Bobcats. Ceasar would punch it in from 11 yards out after Alejandro Lopez found his first carry for a long 20 yards. After the PAT went through East Chambers led 21-9 with 9:30 left in the third quarter.

East Chambers used the passing game to get down the field for their next touchdown. East Chambers almost lost the ball on two plays but were lucky enough to hold onto the ball. Jacoby Perrault used his arm on three big passes including a 32- yard pass to Shelvin to set up the 11-yard pass to Mason Schepf for the touchdown. After the PAT the Buccaneers led 28-9 with just under seven minutes left in the third quarter.

The Bobcats came back with their first points of the second half, thanks to a Broussard 11-yard run. Broussard and Heston Puckett along with Ashworth would keep the drive alive for the Bobcats a few different times. After a couple of penalties Broussard muscled his way through a few defenders for the score. After the PAT went through the Bobcats trailed 28-16 with a little over a minute left in the third quarter.

Broussard finished with 67 yards on the ground for the Bobcats while Ashworth had 60 yards and Puckett 56 yards.

Thanks to a few big penalties from East Chambers, Orangefield shrunk the lead in the fourth quarter. Broussard would take the majority of the carries on the series, including another touchdown run from eight yards out. After the PAT the score was 28-23 with 6:21 left in the game to play as the Bobcats brought the game within striking distance with half the fourth quarter left to play.

After the Bobcats had a chance at the end of the game to take the lead, they fell just short of beating a very good Buccaneers team who brought their best on offense this Friday night. Orangefield will look to rebound next week and get back on track for a strong season.

The Bobcats will hit the road next week when they visit the Hardin Hornets while the Bucs head back home to face Kirbyville.