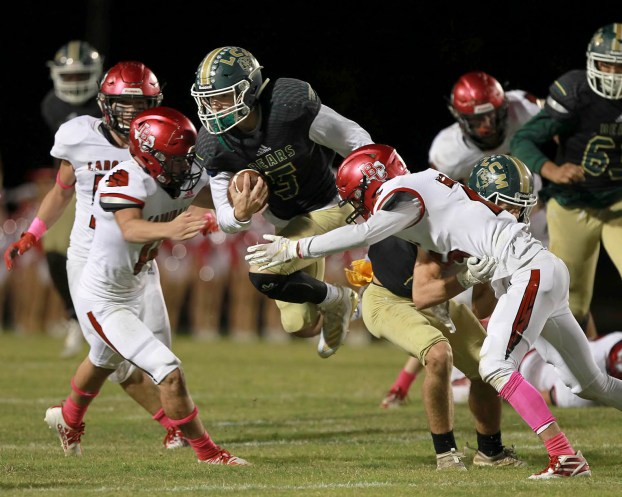 LITTLE CYPRESS – Snagging 19 unanswered points in the second half, the Little Cypress-Mauriceville Battlin’ Bears nailed down a big 26-14 District 11-4A Division I victory over the Bridge City Cardinals at Battlin’ Bear Stadium Friday night.

The Bears (3-2, 1-0) used a stingy defense that allowed just 71 yards to the Cardinals (1-4, 0-1) in the second half, and the legs of quarterback Ethan McCollum and Landon Bearden, who both ran hard behind a big performance by the Bear offensive wall.

The Bears outgained the Cardinals 355-203 on the night.

McCollum rumbled for 145 yards on 24 carries and scored all four of the Bears’ TDs with his legs. He also completed 12-of-20 passes for 115 yards. Meanwhile, Bearden romped for 91 yards on 17 carries.

Running back Ryan Ply paced the Cardinal running game with 69 yards on 12 totes. Quarterback Ethan Oceguera had 11 rushes for 67 yards. Oceguera completed 4-of-14 passes for 58 yards.

After trailing 14-7 at the half, the Bears knotted the game up at 14-14 with 4:03 in the third quarter when McCollum took it around left end and down the sideline for a 21-yard touchdown jaunt on a fourth-and-2 play.

After stopping the Cardinals on fourth-and-2 at the BC 47 with 1:40 in the third, the Bears went 47 yards in 11 plays. McCollum found receiver Brendon Pollock on a huge 16-yard pass on third-and-9 that got to the Cardinal 4. Two plays later McCollum capped it with a one-yard keeper. The Bears missed the extra-point and led 20-14 with 9:12 remaining.

LC-M defensive back Ken’teon Champine helped seal it for the Bears when he picked off an Oceguera pass at the Bear 42 with 7:02 left.

The Bear offense then chewed up more than five minutes off the clock with a 10-play, 58-yard touchdown march. McCollum and Bearden did the damage on the ground and McCollum finished it with a three-yard touchdown blast to push it to 26-14 with 1:46 left.

After a Cardinal fake punt attempt failed at their own 40, the Bears quickly took advantage by putting points on the board. After a delay of game and an incomplete pass, McCollum worked his magic. He darted around the left side and tip-toed the sideline, barely missing going out of bounds twice and then outsprinted the Cardinal secondary for a touchdown from 45 yards out. Robby Wedel booted the extra-point to put the Bears up 7-0 with 5:07 in the first quarter.

The Cardinals countered quickly when Oceguera brought a pooch kick back 38 yards to set up shop at the Bear 32. Ply broke loose for a 22-yard dart to the LC-M 10 and three plays later Oceguera took it in from two yards out. Oscar Carranza booted the point-after to tie it up at 7-7 with 3:21 in the first quarter.

The Cardinals answered again the next time they had it. They chewed almost six minutes off the clock, going 60 yards in 11 plays Oceguera and Ply teamed up for 38 yards on the ground and Oceguera capped it with a six-yard dart up the middle, making it 14-7 Cardinals with 6:33 in the half.

The Bears moved from their own 36 and got all the way to the Cardinal 15 on the next series as McCollum had a huge 27-yard gallop. However, the Cardinal defense rose up and stopped McCollum on a run on fourth-and-2 from the 15 with 2:33 in the half.

The Bears outgalined the Cardinals 178-132 in the first half.

McCollum had 88 yards on 12 carries and completed 5-of-9 passes for 53 yards while tailback Landon Bearden had 37 yards on four totes.

Ply had 67 yards on 11 carries in the half. Oceguera rushed for 47 yards on eight carries and completed 2-of-5 passes for 18 yards.

Penalties hampered the Bears in the first 24 minutes as they were flagged five times for 65 yards while BC had two penalties for 20 yards.

Next week, the Bears will venture to Splendora to take on the Wildcats while the Cardinals return home to host the Huffman Falcons.

In other 11-4A Division I action Friday night Splendora downed Livingston 48-15 and Huffman toppled Lumberton 35-18.

Lady Bobcats fall to EC in 22-3A volleyball play