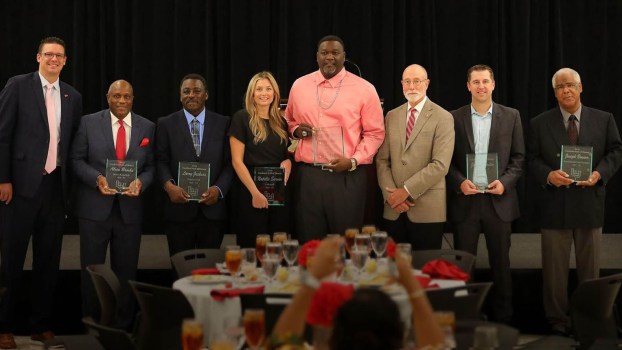 Photo by Lamar University Bridge City’s Natalie Sarver was one of eight new members inducted into the Lamar Cardinals Hall of Honor Saturday.

BEAUMONT, Texas – More than 100 family, fans and former Lamar University athletes showed up to the Setzer Center Ballroom Saturday morning for the Cardinals Hall of Honor as LU inducted eight new members. The class – one of the largest in Hall of Honor history – consisted seven former athletes and one coach and it included six decades worth of LU athletics.

One of the Hall honorees was former Bridge City standout Natalie Sarver, who helped guide Bridge City to the 1998 State Volleyball Tournament and set numerous records at Lamar.

“This is a very special day for Lamar University,” said Director of Athletics Marco Born. “It always great to have your former coaches and athletes on campus. We have a great Hall of Honor and today’s class only added to that. This group, along with those that have come before them, have helped set the standard for what future Cardinals strive to achieve.

“To see all the smiles and to hear all of the stories really made this a great day,” added Born.

The 2019 class is the largest LU induction since 1997 (when LU also inducted eight). There is only one induction class that was larger than LU’s 2019 class and that came in 1973 – the Hall of Honor’s inaugural class.
Natalie Sarver (Volleyball, 1999-2002)
One of the greatest players to ever don the Red and White uniform … Four-year letterwinner … Guided the Cardinals to 93 wins and the 2001 Southland Conference Championship … A four-time All-Southland Conference selection … A former Babe Zaharias Award winner, Sarver was selected as the Southland Player of the Year following her senior season … A two-time SLC all-tournament team selection, Sarver graduated as the school’s all-time leader in kills and digs … She also set the program’s single-match record for kills, and is still ranked among the school’s single-season top 10 list in several categories.