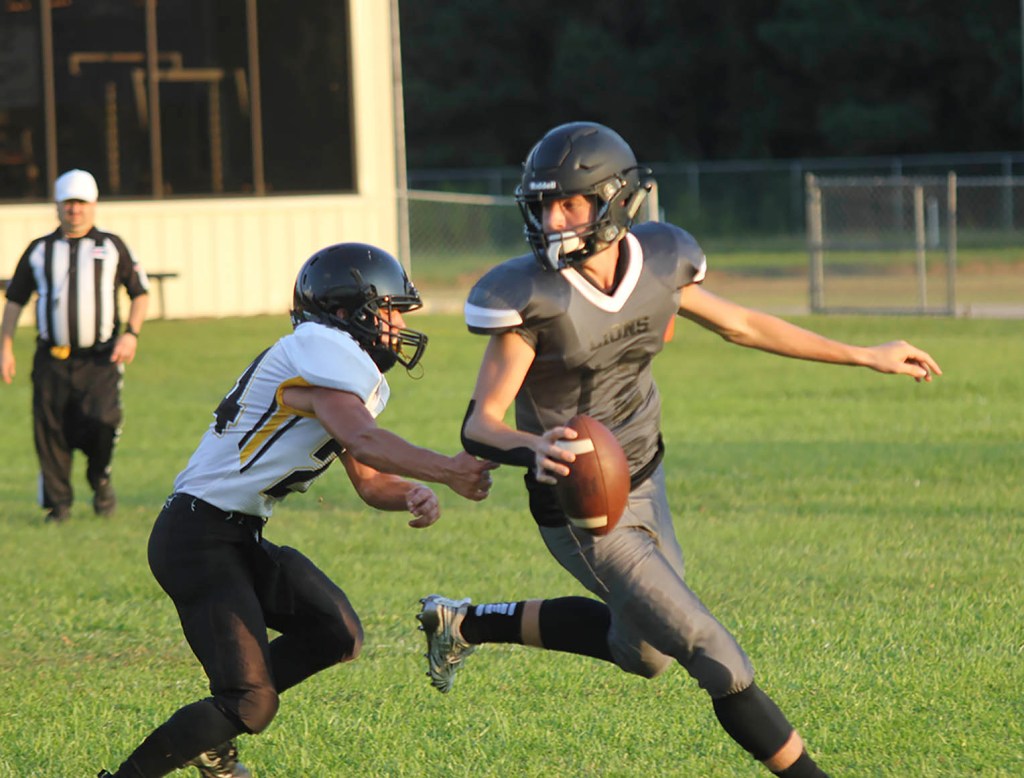 The Lions (2-2-1) found themselves battling from behind but made a couple stout defensive stops in the second half to get back in it before they ran out of time.

The Chargers struck first when back J.R. Morales scored from five yards out and a two-point conversion pass made it 7-0 with 6:03 in the first quarter.

The Chargers snagged a 14-0 cushion when Morales capped a seven-play, 40-yard drive with a four-yard touchdown off right tackle.

It looked as if the Lions trimmed it to 14-6 but a 10-yard touchdown keeper by quarterback James Menard was called back due to an illegal block and Charger Kde Guerra picked off a Menard pass on the following play.

The Lions defense, however, stood firm as they halted the Chargers with a nice goal line stand with 0:51 in the half.

Menard promptly showed off his legs for the Lions as he ripped off runs of 25, 18 and 21 and then scored on a 12-yard scamper. The two-point conversion kick failed as the Lions went into halftime trailing 14-6.

The scoring picked up in a feverish pitch in the second half.

The Lions pulled to within 14-12 when Menard hit Levi Rogers on a superb 67-yard touchdown pass on the second play of the half. The Lions missed the two-point conversion kick and were down by two with 9:05 in the third.

Morales helped put the Chargers up 21-12 when he scored again, this time from 20 yards out with 8:49 in the third.

The Lions wasted no time getting on the board again as Menard teamed up with Bryer Gray on a short pass and Gray did the rest, bolting 55 yards for the score. The two-point kick was blocked as the Lions trailed 21-18 with 8:31 in the third.

Charger quarterback Guerra quieted the crowd for a bit when he went 80 yards down the left sideline to push it to 27-18 with 7:59 still in the third.

Guerra helped up the lead to 34-18 with 2:41 in the third when he picked off a pass over the middle and zipped 45 yards for a score.

The Lions then clawed their way back.

Menard found Rogers again for a big 31-yard passing play and Menard capped the series with a four-yard touchdown run. The two-point conversion kick was no good as the Lions trailed 34-24 with 0:37 in the third.

The Lions made another goal line stand, getting the ball on their own 5 with 8:06 left. After putting together a solid drive, Menard found Rogers on a seven-yard touchdown dart, getting the Lions to within 34-31 with 5:49 remaining.

Guerra put the Chargers up by nine with 5:24 left by scooting 37 yards for a score..

The Lions struck again less than two minutes later when Menard found Gray on a three-yard TD toss and hit Rogers for the one-point conversion pass to trim it to 40-38 with 3:38 left.

The Chargers were then able to eat up some clock as they drove 75 yards and utilized a Guerra 15-yard TD scamper to go up 47-38 with 1:02 remaining.

The Lions showed plenty of heart down the stretch as they marched 42 yards in five plays with a Menard to Rogers three-yard TD pass capping it off with 0:08 remaining.

The Lions then went for the onside kick and the Chargers promptly fell on it and ran out the clock.