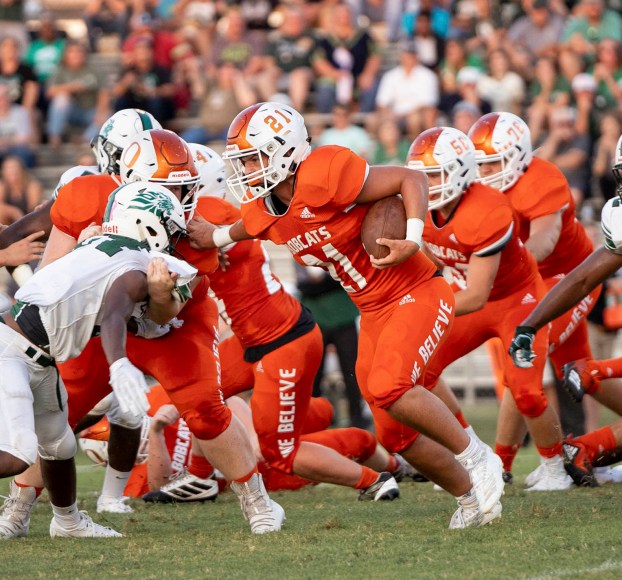 Courtesy Photo Orangefield running back/linebacker Heston Puckett and the Bobcats will hit the road for the first time at Kirbyville Friday night.

Bobcats on road for first time at Kirbyville

ORANGEFIELD – For the first time this season, the Orangefield Bobcats will be getting on their traveling pants as they will visit the winless Kirbyville Wildcats Friday night in District 12-3A Division I action at Wildcat Stadium.

Orangefield strolled past the Buna Cougars 28-12 in their 12-3A opener last week and will look to keep on rolling this week.

One thing for sure, the Bobcats will need to be entirely focused on the wounded Wildcats and not look ahead to next week’s huge contest back at home against East Chambers (3-1, 1-0) as Kirbyville will look to catch the Bobcats off guard as Orangefield invades Wildcat Country.

The Wildcats went 1-9 last season with their only 12-3A win coming against Warren and they are off to another slow start this season, being outscored 207-41.

The Wildcats are paced by quarterbacks Dilynn Bishop and Cal Jones as they are not afraid to put the ball in the air. Bishop passed for 1,491 yards and nine touchdowns last season.

They have a go-to receivers in Hunter Wallis and Keshawn Keyes and a strong back in Armoine Alfred.

While the Wildcats don’t have a deep backfield, the Kirbyville defense is going to have to as they say “pick their poison” in trying to stop a stable of Bobcats out of their vaunted Slot-T arsenal.

Quarterback Gunner Jones has been steady in delegating the ball behind an offensive line that has played well.

The Bobcats have shown some speed getting on the edge with swift backs like Kaiden DuBose, Chase Broussard and Hunter Ashworth and the hard inside running from the likes of Heston Puckett, Kadeon Evans and Kent Michael.

The Bobcats have been firm on defense as well in controlling the line of scrimmage with the tough play of linemen Kayson DuBois and Colby Gonzales and a tough secondary sparked by the likes of Clayson Choate and Cade Brown.

There are plenty of other important matchups Friday to crank up the second week of 12-3A action.

Lady Bears down Silsbee in 4

SILSBEE – The LC-M Lady Bears improved their District 22-4A record to 5-1 Tuesday night after they downed the Silsbee... read more