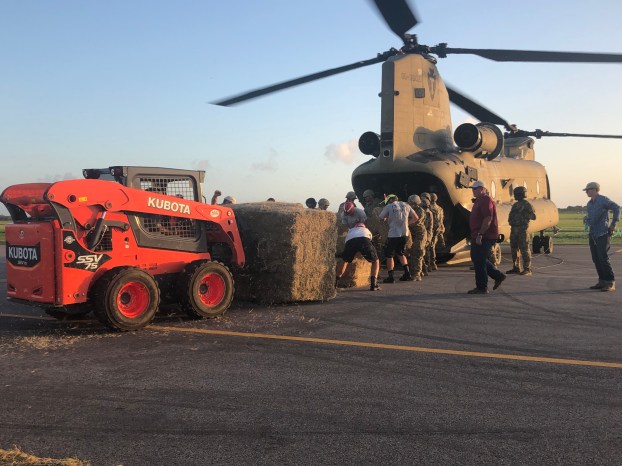 In the aftermath of Tropical Storm Imelda, which affected several Southeast Texas counties with high winds and flooding, employees of the Texas A&M AgriLife Extension Service and the Cooperative Extension Program of Prairie View A&M University rallied to help.

“Tropical Storm Imelda brought more rain and flooding to some coastal areas of Southeast Texas than Hurricane Harvey,” said Monty Dozier, Ph.D., AgriLife Extension director for the agency’s Disaster Assessment and Recovery Team. “This brought additional challenges to providing assistance, but our professionals were able to overcome those challenges to assist farmers, ranchers and others in the affected area.”

Dozier said one of the main ways the agencies provided assistance was helping solicit local hay donations for aerial hay deliveries to more than 4,500 head of stranded cattle in Chambers and Jefferson counties.

“AgriLife Extension personnel helped collect hay bales at animal shelters that were established in Chambers and Jefferson counties and also helped ensure those bales were transported to the Chinook helicopters that distributed them,” he said.

Dozier said from Sept. 21-22, a total of 1,471 square bales of hay were airdropped to 4,516 stranded head of cattle in the two counties. He cited the assistance of the Texas Animal Health Commission, Texas Department of Agriculture, the military and Texas A&M Task Force One in support of these efforts.

While the airdrops have ended, additional hay distribution is continuing to affected areas via boats and “high-profile” military and emergency response vehicles, Dozier said. So far, an additional 485 square bales and 10 round bales have been delivered to stranded cattle using those methods. 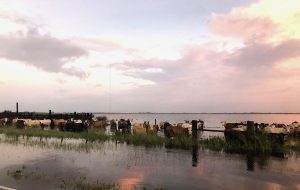 “Working in concert with the TAMU VET in housing and care of animals, we provided food, shelter and medical assistance to 23 horses, 13 cattle, 14 dogs and two cats in Chambers County,  and to nine horses and eight goats in Jefferson County,” Dozier said.

According to the VET, it has treated more than 300 animals in Chambers County, most of which were pets separated from their owners during the severe flooding, and the team is planning to treat even more while in the county.

“The last several deployments with our county Extension agents strike teams have been in concert with the VET,” Dozier said. “We work as a team in sheltering operations, which have  been a real benefit due to our respective expertise and abilities and for the management of volunteers.”

Support through surveying storm damage was also provided by the agencies to the Texas Division of Emergency Management and Orange and Jasper counties.

“Preliminary damage assessments are required for FEMA to help ensure counties are eligible for federal funds in the event of a presidential emergency declaration,” he noted.

To the Leader Governor Greg Abbott today declared a state of disaster in several counties that are currently experiencing widespread... read more