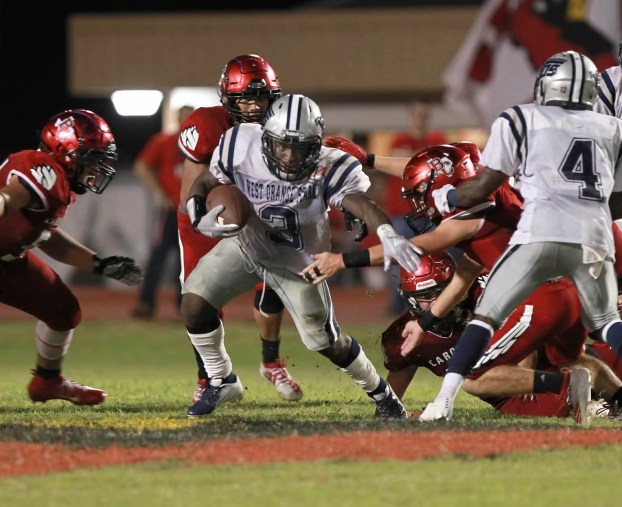 BRIDGE CITY – The West Orange-Stark Mustangs ran their record to a perfect 28-0 against Bridge City Friday night after downing the Cardinals 46-7 at Ward Stadium.

The Mustangs limited the Cardinals to 176 total yards.

WO-S quarterback Jerren Terrell completed 12-of-19 passes for 137 yards and ruahed for 58 more on seven carries.

BC quarterback Ethan Oceguera completed 4-of-10 passes for 74 yards and rushed for 61 yards on 14 carries. The Mustangs limited standout Cardinal fullback Andy Lara to 20 yards on 11 carries.

The Mustangs carried a 18-7 lead into the half and struck quickly to start the third quarter.

Terrell threw a dart to receiver Jalen Thompson near the left sideline and Thompson did a good job staying in bounds en route to a 50-yard touchdown pass to push the lead to 25-7 with 11:35 in the third.

The Mustangs scored again the next time they got it, moving 55 yards in 10 plays. Terrell capped it off with a 15-yard touchdown scamper on fourth down, making it 32-7 with 4:01 in the third.47-yard drive with a 38-yard touchdown romp up the middle to make it 39-7 with 6:42 remaining.

The Mustangs scored again midway through the third quarter when Gales completed a four-play, 55-yard drive with a 38-yard touchdown gallop up the middle to make it 39-7 with 6:42 in the quarter.

After pouncing on a Cardinal fumble at the BC 6 late in the game, Mustang back Terry Harris scored three plays later on a five-yard scamper.

The Cardinals moved from their own 5 all the way to the Mustang 38 in seven plays midway through the first quarter thanks to a 22-yard scamper by Oceguera and a 17-yard blast by Lara but the drive stalled when Lara fumbled the ball away to Mustang defensive back Artavious Samuel at the WO-S 38 with 4:01 in the first quarter.

The Mustangs then drove to the Cardinal 34 where they stalled when a Terrell pass was picked off by Jackson Tims with 1:49 in the first quarter.

Each team failed on fourth down conversion attempts on the next two series. The Cardinals stuffed a Mustang fake punt attempt and the Mustangs hatled the Cardinals on a fourth-and-1 play from the Mustang 35 with 7:41 in the half.

The Mustangs then put together a six-play scoring drive Gales ripped off a 14-yard run and then Chaney took over, carrying the next two plays for 29 yards. Chaney capped the series with an 11-yard touchdown dart up the middle and Terrell ran in a two-point conversion run as WO-S led 8-0 with 6:10 in the half.

After a tough exchange, the Cardinals fumbled the ball over to Mustang defensive end Dontrey McClain at the BC 28 with 5:14 in the half.

The Mustangs scored four plays later on fourth-and-1 when Gales went off right tackle for a 19-yard touchdown scamper with 3:46 in the half to make it 15-0.

The Cardinals countered with a huge play on the next series when a scrambling Oceguera hit receiver Colby Collins for a 64-yard strike all the way to the Mustang 12. Three plays later Lara bulldozed his way into the end zone off left tackle from five yards out to trim it to 15-7 with 2:04 in the half.

The Mustangs closed the half with a seven-play, 51-yard drive as they settled for a 31-yard field goal by Angel Ibarra with 0:11 in the half.

Chaney had 67 yards on eight carries while Gales had 65 yards on nine totes. Terrell ran for 26 yards and passed for 52.

Oceguera rushed for 47 yards and passed for 64 while Lara had 28 on the ground.

The Mustangs will take on Jasper at home next week to wrap up their non-district schedule and will start 10-4A Division II play Oct. 11 at Silsbee.

The Cardinals will have their bye week next week and will go to LC-M Oct. 11 for their District 11-4A Division I opener.

Bobcats rope Buna in 12-3A Division I opener

By Caleb Adams The Orange Leader   ORANGEFIELD – The Orangefield Bobcats beat the Buna Cougars 28-12 in their District... read more