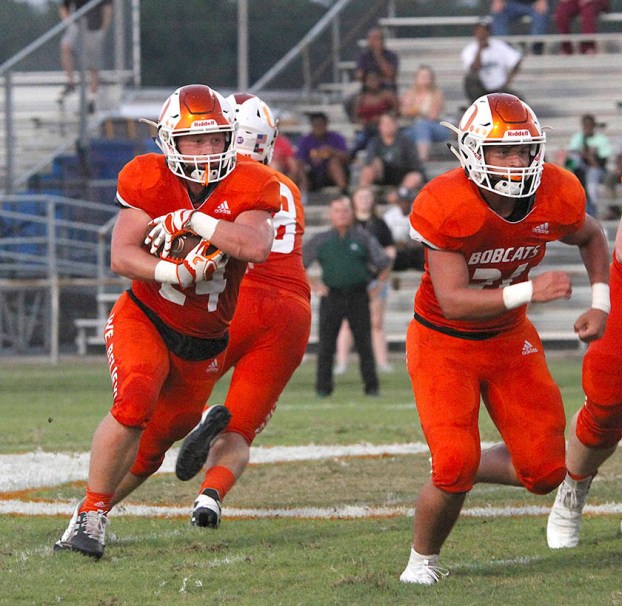 Bobcats rope Buna in 12-3A Division I opener

ORANGEFIELD – The Orangefield Bobcats beat the Buna Cougars 28-12 in their District 12-3A Division I opener in Orangefield Friday night, thanks to an explosion of points in the second quarter for the Bobcats.

Orangefield (4-0, 1-0) would score 21 in the second quarter and that would be enough to seal the win up.

Buna (2-2, 0-1) didn’t give up throughout the tough game and gave the Bobcats a challenge. The defense for the Bobcats was superb, both teams have a similar offense so the main advantage came from which defense would step up to the task. The Bobcat defense stepped up in a big way.

The Bobcats take a quarter to get their offense going, but when the second quarter hit the Bobcats’ run offense really took off.

With seven different backs taking a carry throughout the first half, Orangefield was really spreading the love with the rushes. Hunter Ashworth would lead the way in the first half with 40 yards on just four carries.

The Bobcats score the game’s first points with 4:30 left in the first half thanks to an end around run from Kaiden DuBose inside the red zone. The Bobcats put together a solid drive with Chase Broussard and DuBose putting up solid runs around either tackle. DuBose would find the corner of the end zone after a 8 yard run. After Gunner Jones put the PAT through, the Bobcats led 7-0 over the Cougars.

After forcing the Cougars to punt again, the Bobcat’s Kent Micheal would block the punt and return it for a touchdown all the way from the opposite 45 yard line as the Bobcats went up 13-0 after missing the PAT, over the Cougars.

Orangefield continued the onslaught in the second quarter after Heston Puckett found the end zone. Ashworth would set up the touchdown with a tough 18 yard run to get inside the five yard line, breaking tackles left and right on the run. The Bobcats went for two and put DuBose under center for the play. DuBose would run it to the right, get caught up on the sideline and break back to the left to find the conversion. After the great play, the Bobcats led 21-0 just before halftime.

The Cougars found life thanks to the passing game from quarterback Dylan Graffagnino, who found Blaine Marks on two huge throws. A 40-yard pass would set up the Cougars within striking distance. A couple plays later the same pass got 28 yards and a touchdown over the Bobcats secondary. The two-point conversion was no good and the Bobcats led 21-6 heading into halftime.

The Bobcats get the first possession of the second half and took full advantage, driving it all the way down the field for a touchdown to open the half. Clayson Choate would set up the Bobcats on the 50 with a stellar return. With a flurry of run plays the Bobcats hit the end zone again thanks to Puckett again, who scored from a yard out. After the PAT the Bobcats led 28-6 in the third quarter.

The Cougars found another score late thanks to Marks catching another long pass from Graffagnino. Marks would catch a 22- yard pass for the touchdown after Jacob Menard did a lot of the dirty work on the ground. The Bobcats still led 28-12 after the two-point conversion failed by the Cougars with close to four minutes left.

The Bobcat defense clinched up late to hold on to the lead and make the Cougars life hard.

The Bobcats finished with 243 total yards, 210 of it via the ground game. Puckett led the ground attack with 56 yards on 11 carries. Ashworth had 51 yards on eight totes.

Buna finished with 223 yards. Graffagnino completed 6-of-10 passes for 107 yards with Marks catching four for 92 yards. Menard finished with 57 yards on 11 caarries.

The Bobcats will test the road waters for the first time next week when they visit Kirbyville while the Cougars return home to host Anahuac.