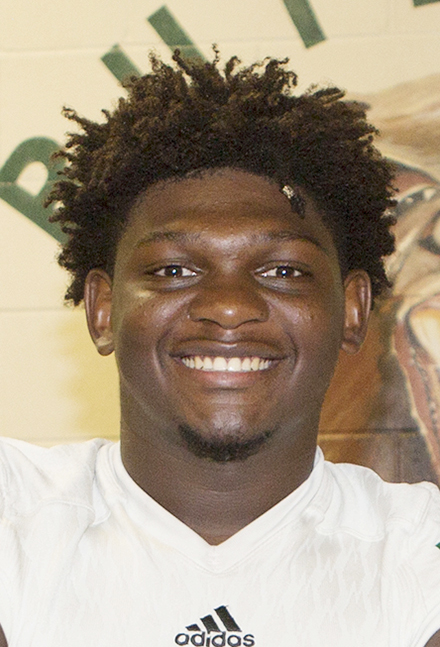 LITTLE CYPRESS – It was an explosive performance by senior quarterback Ethan McCollum, Friday that helped the Little Cypress-Mauriceville Bears plow through the Hawks of Hardin-Jefferson. The Bears downed the Hawks 29-14, with McCollum’s 305 total yards of offense, including 179 passing yards.

Despite a slow start, the Bears (2-2) tallied the first points of the night. McCollum capped the 65-yard drive with a short three-yard skip into the end zone. The Bears led 7-0 with just under four minutes left in the first quarter. The stout Bear defense kept the Hawks (0-4) off the board in the first.

The Hawks offense seemed to get rolling to open the second quarter. Hawk quarterback Westen Nugent led the charge, marching the Hawks offense down the field into Bear territory. Sam Dickerson trotted in from six yards out to put six on the board for the Hawks. Following the extra point, the score was tied with 10:12 remaining in the first half of play.

LC-M took little time to answer back. Three plays and one minute later McCollum blasted off the right side for a 55-yard touchdown run to flip the lead back to the Bears. A lead that LC-M would keep the duration of the game.

Hardin-Jefferson started the opposing drive at their own 20. Unfortunately, for Hawk fans, the ensuing snap would be fumbled and scooped up by Bears defensive lineman Eric Garcia, which gave the Bears the ball inside the Hawk 20. McCollum would put the Bears in the end zone once more, but a holding penalty negated the touchdown and the Bears eventually would turn the ball over on downs. Garcia chipped in with three tackles, one sack and one fumble recovery on the night.

Another stagnant series by the Hawks sent the ball back to the Bears where running back Landon Bearden ripped off a nice 13-yard run to get the drive going. Bearden finished what he started with a three-yard dive into the end zone. McCollum flew in off the right side for the two-point conversion, giving the Bears some breathing room, leading 22-7, at halftime. Bearden finished the night with 55 yards rushing.

The Hawks attempted to get the ball moving into Bear territory to open the second half. Nugent hit Sage Roberts for a 35-yard completion down the sidelines that had Hawk fans on their feet. The momentum was short lived with more miscues and penalties by the Hawks. A fumbled snap gave the Bears the ball at the Hawk 18.

It took one play for McCollum to ice the cake with a big run untouched up the middle and a big 29-7 lead over the Hawks. McCollum rushed for over 100 yards on the night.

The two teams swapped possessions throughout the third quarter and once the Bears pulled their starters, the Hawks offense tallied some big plays and one last shot at the end zone. Luke McCullough entered the game for the Hawks and took his first hand-off of the game 39 yards for a score, but it was not enough to keep the Hawks in the game with less than two minutes in the game. Nugent led all Hawks with 50 yards rushing and 85 yards passing in the loss.

The Bears will have their bye week next week before opening District 11-4A Division I play at home Oct. 11 against Bridge City while the Hawks will visit Tarkington next week.