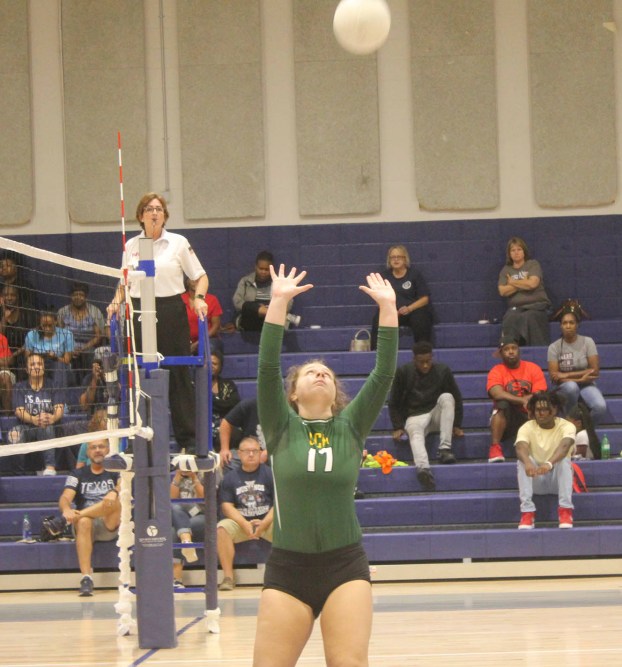 WEST ORANGE – Utilizing a ton of balance across the board Tuesday night, the Little Cypress-Mauriceville Lady Bears swept the West Orange-Stark Lady Mustangs 25-16, 25-14, 25-18 in District 22-4A action at Mustang Gym.

The Lady Bears (3-1) had 29 kills on the night compared to 25 by the Lady Mustangs (1-2 in district), but it was their defensive digging and service game that really paved the way for them.

Lady Mustang Marlandria Hebert had another big match at the net as she finished with a match-high 14 kills while Gabby Anderson added five for WO-S.

The Lady Mustangs got off to a hot start in Game One, streaking out to a 11-4 advantage but the Lady Bears fought right back with a 12-3 run to go up 16-14 and then they scored nine of the last 11 points to snag the game.

The Lady Bears darted out to a 13-4 cushion in Game Two. The Lady Mustangs got as close as 20-13 and then the Lady Bears ran off with five of the next six points.

LC-M streaked out to a 9-3 lead in Game Three but the Lady Mustangs rallied to trim it to as close as 21-18 until LC-M collected the match’s last four points.

The Lady Mustangs will visit Hardin-Jefferson Wednesday in a makeup match that was cancelled last Friday and will then visit Lumberton Friday.