MAURICEVILLE — Top Deck Inc., a national company based in Mauriceville, was announced as the first sponsor of the Lamar State College-Orange Gators Fishing Club on Tuesday.

“They are the first major sponsor,” LSCO President Thomas Johnson said. “This is a wonderful thing for Orange County.”

Since the company opened it’s doors in 2009, it has grown over the years. It was averaged a 30-percent growth in just the past five years, according to its official website. Now, it wants to give back to the community. 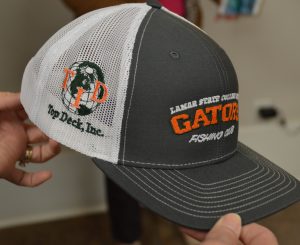 Dawn Burleigh/The Orange Leader Lamar State College-Orange caps just got an upgrade with the addition of the Top Deck Inc. Logo on the side as the business becomes the first sponsor of the Gators Fishing Club.

“In ten years we have grown and thrived by supporting local and local organizations,” Chris with Top Deck said. “This will provide the necessary resources for the team so they may concentrate on education instead of fundraising.”

Not only will the company logo now grace the caps for the team but its name will also be on the jerseys worn by the Fishing Club.

Top Deck made a three-year commitment to sponsor the team. 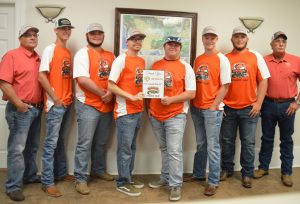 Dawn Burleigh/The Orange Leader
Lamar State College Orange caps just got an upgrade with the addition of the Top Deck Inc. Logo on the side as the business becomes the first sponsor of the Gators Fishing Club.

This is the first anglers team for the school. Brett Fregia, Dagan Leger, Jack Tindel III, Melvin Kohn, and Trace Moore made history as the first members of the college’s Fishing Club. They officially signed on August 2, 2019.

Earlier this year, LSCO announced the school’s official mascot would be the gator. LSCO had not had its own mascot since becoming its own degree-granting institution in 1991.

According to the club’s charter, it was created to educate anglers and develop angling skills with an emphasis on bass fishing, to promote sportsmanship through competition and fellowship, to encourage stewardship of natural resources, and to participate in community service.

The Club’s first tournament is scheduled on September 28, 2019.