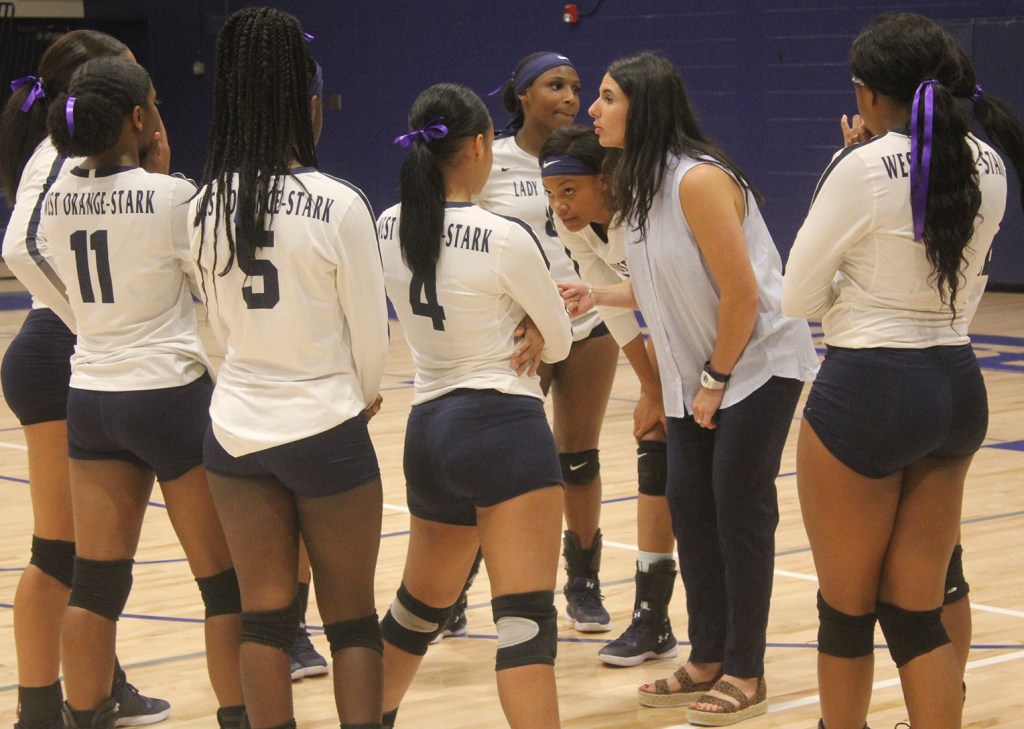 Van Wade/Orange Leader WO-S volleyball coach Ashlyn Pinner chats with the Lady Mustangs during a timeout in Game Five of their match with Silsbee Tuesday night.

WEST ORANGE – What a match and what a win it was for the West Orange-Stark Lady Mustangs Tuesday night in District 22-4A action at Mustang Gym.

The Lady Mustangs received huge play at the net from Marlandria Hebert, Gabby Tims and Paris Overstreet and superb defense from the entire squad as they turned back the Lady Tigers.

Silsbee cruised in Game One but the Lady Mustangs fought back in Game Two, trailing 21-20, WO-S tallied the last five points to draw even.

The Lady Mustangs let Game Three slip away after holding a 22-20 edge as the Lady Tigers scored four of the final five points to earn the game.

However, the Lady Mustangs showed plenty of resolve as they led Game Four 20-18 and then ran away with the next five points.

WO-S dominated the final stages of Game Five, breaking a 8-8 tie and strolling away with seven of the game’s final eight points.

Hebert had 15 kills to lead the Lady Mustang arsenal. Overstreet had eight kills while Tims had seven and Trinity Garrett added four.

The win offset a superb performance by Silsbee’s Pressley Alaniz, who notched a match-high 20 kills. Honestee Holman had eight kills for the Lady Tigers while Sydney McKinney and Ahloyia Henry added seven apiece.

The Lady Mustangs will visit Hardin-Jefferson Friday in 22-4A action.