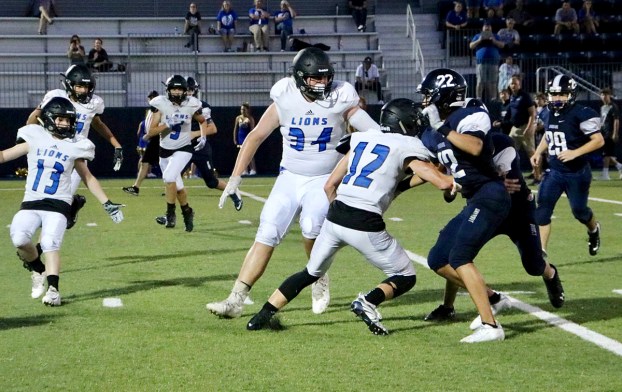 The Community Christian Lions traveled to Houston for a Thursday night match up against Emery Weiner Jaguars.  The Lions looked to revenge last year’s loss at home. As six-man football goes, it was a low-scoring game as both defenses came out strong. During the match up the Jaguars committed three turnovers to the Lions two.
Freshman defensive back and wide receiver Isaac Rizzato had another outstanding game on both sides of the ball for the Lions. Sophomore Defensive Captain Bryer Gray had nine solo tackles and multiple assists.

Junior offensive and defensive  lineman Levi Rogers scored twice on passes from junior quarterback James Menard. One of those touchdowns being on a gutsy 4th and goal from the 3 –yard line. Menard also scored as he stripped the ball from a Jaguar running back, recovered the fumble and ran it in from midfield.
When the smoke cleared the score ended in a 22-22 tie.  This puts the Lions at 1-1-1 on the season. The Lions face Houston’s Ft. Bend on Friday Sept 20th at 6:00 pm.